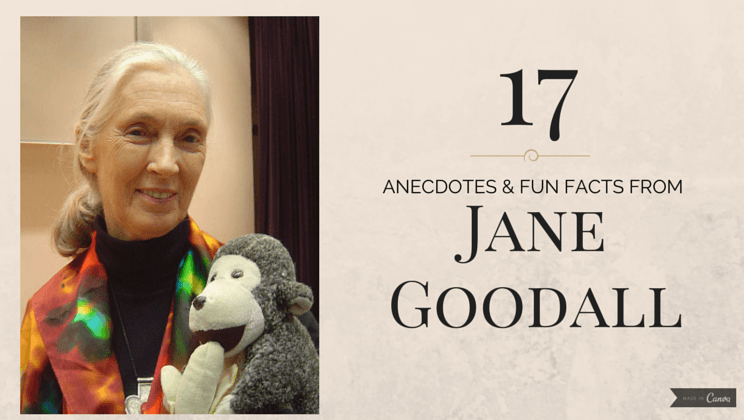 What intellectual woman out there with a longing for solitude didn’t occasionally dream of living the life of Jane Goodall, observing chimpanzees in the wild and devoting her life to changing the world?

Maryam Heinen had the chance to listen to Dr. Goodall speak about her long and illustrious career at the Osa Field Institute’s official launch in Costa Rica, and rather than hoard the experience, she shared these seventeen tidbits from the talk.

1. At the age of one and a half, a young Jane brings in a handful of earthworms into her bed. Unlike most moms, her’s doesn’t get angry or make a fuss, she simply tells Jane that the the worms need the earth to live and that they would die if she kept them in her bed. Together, they put them back in the garden. Her mother proves to be a constant source of support, encouraging Jane to seek her dreams.

2. It’s 1938; the Church of England accepts the theory of evolution, Nazi Germany invades Austria, superman makes his first appearance, and Jane— age of four – wants badly to find out how an egg comes out of a hen. She decides to hide in a small henhouse for hours, waiting patiently to see what happens while her entire family frantically searches for her.

3. As a young adolescent, Jane reads Doctor Doolittle books by Hugh Lofting. “I pretended that I could also speak to the animals, and my friends believed me,” she says. At about age 11, she reads Tarzan of the Jungle. “What did Tarzan do,” she playfully asks the audience. “Well, he married the wrong Jane.” These books influence and fuel her dreams and love of animals.