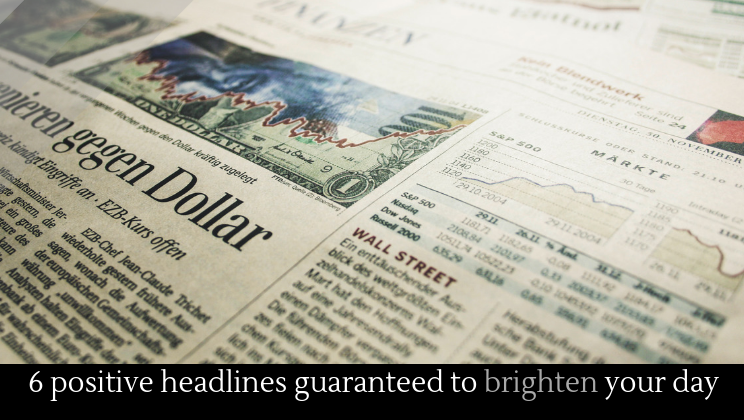 If you keep up with the news, you’re probably pretty depressed. But that might be because you’re not looking in the right places. Here are six positive news stories that will make you feel like the world isn’t terrible––if only for a minute.

Businessman builds home for boy who studied under street light: A Peruvian businessman built a home for a boy whose image went viral. He also plans to give the family money to start a business.

New York could become first state to ban cat declawing: Declawing is illegal in much of Europe, Los Angeles, San Fransisco, and Denver because it’s not really de-clawing––it actually amputates their toes.

Illinois poised to enact historic recreational marijuana bill that could clear convictions for 770,000: Anyone convicted of possessing small amounts of marijuana can petition to have their records expunged if this bill passes.

One of South Korea’s largest dog meat markets – where chilled canine flesh was served and live animals were slaughtered to order – is closed down: The market actually keeps live dogs on premises to slaughter.

Kindergarteners learn sign language to make first deaf student, 6, feel welcome at school: This Maine school showed more dedication to inclusivity than just about any school you’ll ever read about by encouraging everyone to learn sign language.

This Circus In Germany Uses Holograms Instead Of Animals To Stop The Mistreatment: Using projectors and computers, a German circus replaced all their animals (and animal cruelty) with holograms.