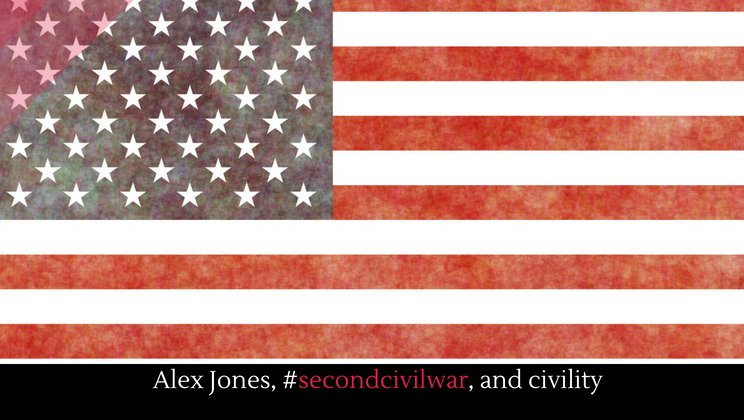 On Sunday, December 4, 2016, Edgar Maddison Welch, armed with an assault rifle, entered a Washington D.C. pizzeria called Comet Ping Pong. He was there to “self-investigate” claims that the restaurant’s owner, a vocal supporter of and vigorous fundraiser for the Democratic Party, operated a pedophilia ring. According to the amateur investigators on the case, united by #Pizzagate on various social media platforms, owner James Alefantis (“A Secret in Plain Sight?” wonders one Twitter user, “James Alefantis = ‘J’aime les enfants’ ???”) serviced high-level members of the Democratic Party with children locked up in the restaurant’s basement. That the restaurant does not have a basement did not stop the #Pizzagate vigilantes’ online sleuthing, and in the mid-November height of the panic, Alefantis and his restaurants received a lot of “death threats or serious continuing threats by very impassioned people.” Welch’s violent “investigation” was the culmination of these threats.

Alex Jones, arguably the most (in)famous conspiracy theorist in contemporary America, perpetuated the #Pizzagate conspiracy on his radio show Infowars. Jones eventually apologized for promoting the false allegations of pedophilia, but only after Welch brought an AR-15 into Comet Ping Pong, and only after James Alefantis sued Jones. #Pizzagate still emerges from time to time, but it has disappeared from the public consciousness. The scandal did little to sully Jones’s reputation. During the weeks leading up to July 4, 2018, Jones suggested that “Globalists”––a shadowy, international and internal conspiracy against America––will launch an assault on our country. Once again, Jones helped inspire the birth of a hashtag: #secondcivilwar.

Unlike #Pizzagate, #secondcivilwar was almost entirely satirical. So far, knock on wood, there have been neither armed uprisings nor civilian militias marching the streets. There has only been tweet after tweet mocking Jones. That seems to be the pattern: Jones postulates a theory that seems to many to be ridiculous, his theory sparks outrage and mocking among some and allegiance among others, and then the theory gradually fades from view, leaving only a deepening social rift in its wake. But what if, instead of reacting to the conspiracy itself and instead of mocking believers or disbelievers, we instead ask what causes this pattern.

Historian David Brion Davis has suggested that “[c]ollective beliefs in conspiracy have usually embodied or given expression to genuine social conflict.”(David Brion Davis, ed, The Fear of Conspiracy: Imagiens of Un-American Subversion from the Revolution to the Present (Ithaca: Cornell University Press, 1971), xiv.) At first blush, Jones and other conspiracy theorists may seem to have a hodgepodge of disparate conspiracies. But if you spend some time on Reddit.com/r/conspiracy, plumb the depths of YouTube, and listen to a few Infowars episodes, a pretty clear pattern emerges. Jones and his followers fear one thing above all: tyranny. Jones sees himself as the leader of an “Info War” against the “Globalists,” bent on creating a world government in the vein of Biblical Revelations.

Take the conspiracies surrounding the 2016 Democratic presidential candidate Hillary Clinton, for example. For some, she was a shapeshifting lizard-person. For others, she was a puppet of the Rothschild family. For still others, she and her husband orchestrated several murders while her husband was governor of Arkansas. #Pizzagate was one way for the conspiratorial community––often politically right-leaning––to express their distrust of Hillary Clinton, who had come to embody the corruption rotting the U.S. government from within. The grotesqueness of Clinton’s alleged actions corresponds with the powerlessness her accusers felt in the face of the contemporary political system (David: 1971, 9) Even outside the more fringe conspiratorial communities, Hillary Clinton came to represent a threat to democracy, and her potential election raised the specter of tyranny.

The popular sentiment against Hillary Clinton can best be summed up by a famous scholar of American politics:

Such ideas, based on extreme solicitude for the individual and an equal hostility to government, were expressed in a spirit of foreboding and fear for the future…Politics may have been stable, but the stability rested on corruption, which, they warned, if left unchecked, would eat away the foundations of liberty. Everywhere there was self-indulgence, effeminizing luxury, and gluttonous pursuit of gain. If nothing were done to stop the growth of these evils, England would follow so many other nations into a tyranny from which there would be no recovery (Bernard Bailyn, Ideological Origins of the American Revolution).

Historian Bernard Bailyn was not commenting on the 2016 presidential election, he was describing the political climate leading up to the American Revolution. Nevertheless, his description of the conspiratorial logic that fueled the American Revolution fits the 2016 election uncannily, and it fits both candidates. And this is the point. Both sides of the political aisle think this way, and both sides of conspiratorial divide think this way––and both mock the other side.

Instead of launching into the #secondcivilwar social media fray, then, perhaps it’s better to think through what might be underneath this conspiracy: fear in losing individual rights and freedoms. Conspiracy theorists and doubters might not agree on much else, but they can at least agree on the importance of individual rights. From there, a dialogue might be possible. If we immediately resort to mockery, though, we only further the deepening divide between us.