Chinese woman arrested for $400,000 in bribes to get son into UCLA 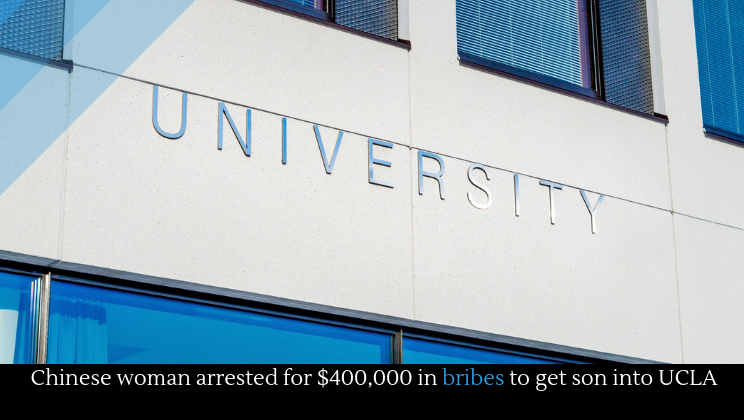 Xiaoning Sui, 48, of Surrey, British Columbia, Canada, has been arrested in Spain for allegedly paying Rick Singer $400,000 to ensure her son got into UCLA. With the help of Laura Janke, Sui furnished Singer with images of her son playing soccer and a fake website for him. They used these to portray her son as a sop soccer player.

The massive college admissions scandal was investigated by the FBI in an operation codenamed Varsity Blues, which uncovered some high-profile parents cheating their kids way into college. Actress Felicity Huffman was just indicted for her crimes, but she will only spend 14 days in jail––and a very cushy jail, at that––for taking part in a massive college admissions scandal. This is supposedly bad news for Lori Loughlin, who, unlike Felicity Huffman, has shown no remorse for her actions.

But really, is 14 days enough? So many students work incredibly hard––too hard, in fact––to get into university. They pay ungodly amounts of money to Kaplan and other test prep giants so that they can game the SAT, they high private admissions counselors, and when it’s all said and done they take out an average of $30,000 loans per student. Of course, the poorest students often take out the most, and they hope to reap huge rewards.

The looming student loan crisis began to make many question the worth of a college degree, at least insofar as it was weighed against crushing debt. But for many students, the Singer scam has broken their spirits. The admissions process is so obviously biased and broken, they think, that it’s not worth bothering about. Especially now that it’s clear the super rich can cheat their way into top schools with minimal punishment.