Common Dreams is hot garbage that no one should read 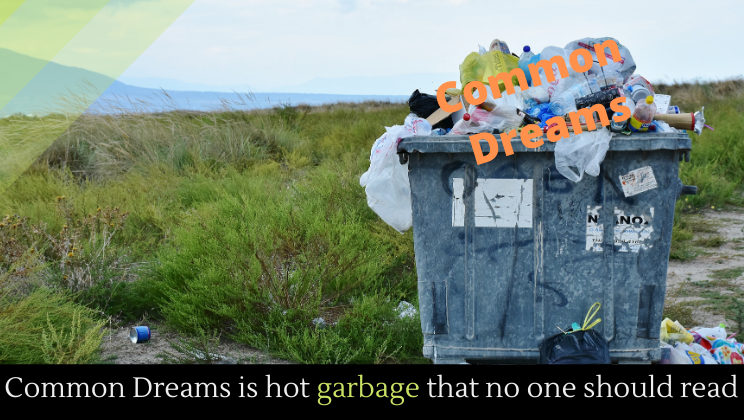 The far right-wing media gets accused of a lot of thing: blatant partisanship, inflammatory headlines, and even pushing conspiracy theories. No one really talks about the far left-wing media that does the same thing.

Well, I’ve finally lost my patience with one website after reading a particularly obnoxious headline: “After Biden Offers ‘No Comment’ Response to Middle East Escalation, Critics Suggest: How About ‘No War With Iran.'” And then it’s subheading quotes a tweet: “If your candidate right now is saying anything other than ‘the US cannot go to war with Iran and should de-escalate immediately,’ they shouldn’t be your candidate.”

You know what’s unhelpful during a ridiculously polarized political moment? Absolutist, simplistic articles like this one that leave no room for diplomatic nuance.

So I’m going to say it: Common Dreams is not news and it poisons the American political climate by radically advocating for the most extreme left views.

It reminds me a bit of cable news, actually, and that is not a good thing. A journalist at The Guardian described the impact of cable news on his family. He no longer talks to his mother, a devout Fox News viewer, about politics. He took to Twitter to ask how many families have dealt with similar divisions. The response was overwhelming, with many describing downright falling-outs with family members.

That’s only a problem for, you know, families. Cable news has been pulling in tremendous ratings recently, and it’s hard to imagine that it’s because of anything but partisanship––so they benefit from this discord. The more Americans hate the other side, the more they’re willing to watch shows that openly and regularly attack the opposing ideology.

Those who watch the programs like that tend think that the world is more divided than ever before. They see news articles and opinion pieces calling Trump a fascist or suggesting that the entire GOP is somehow corrupted by corruption, evil, and fascism. The left, meanwhile, is portrayed as full of radical socialists and baby-killers.

But a recent study has revealed that even diverse groups around the world have more in common than we think.  Another study revealed that only 33% of Americans are at the polar opposites of the political spectrum, the other 67% represent the exhausted majority. We just have to get past this perception that we differ.