Japanese cherry blossoms bloomed earlier than any time in the past 1,200 years 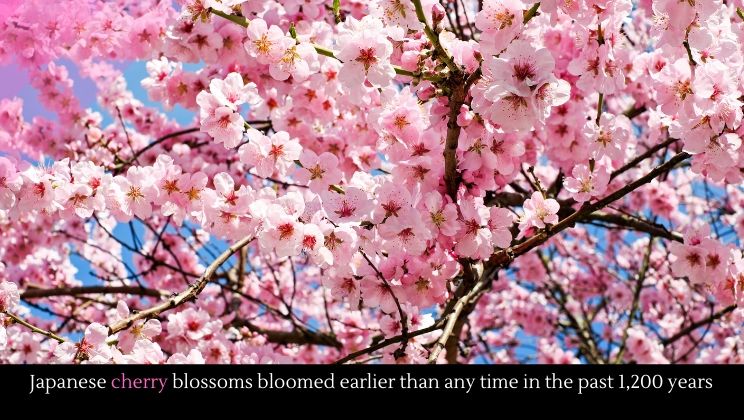 Climate change is leading to increasingly bizarre changes, including Kyoto’s cherry blossoms blooming at the earliest date in 1,200 years.

The Arctic Circle reached a shocking 100.4ºF last summer, a temperature scientists didn’t expect to see until the year 2100. If that temperature is verified, it will be the hottest ever recorded. Climate change is killing people––literally. Scientists in Australia estimate that some 2% of deaths between 2006-2017 resulted from excessive heat. Without accounting for climate-related deaths as they happen, it will be impossible to keep track of the damage or understand exactly how climate change is affecting people.

Just look at the fires from Australia as the 2020 ended: the country was literally burning to the ground. The images that came out of the country depict “armageddon.” An estimated 500 million animals have been killed in the fires. The fires are so bad they’re creating their own weather. Thousands of Australians were trapped on beaches trying to escape the fires, which are neared Melbourne suburbs. Elsewhere, in villages in the state of Victoria, citizens were warned that it’s too late to escape, and they must stay inside.