In the past decade, STEM majors have soared while humanities suffer 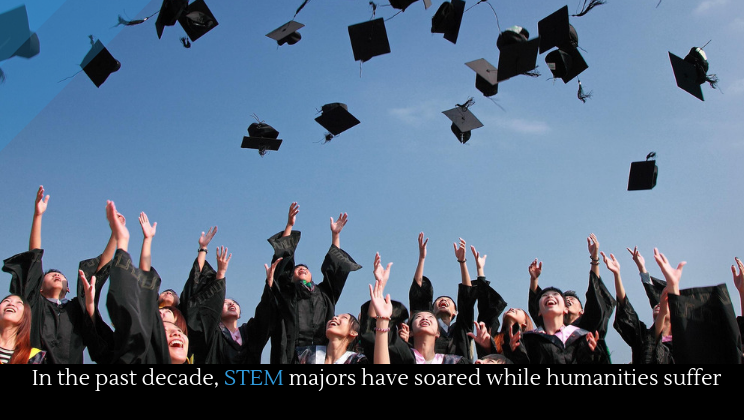 Universities bestowed nearly 30% more degrees in 2015-2016 than they did in 2005-2006. Despite the overall increase, not all majors or fields saw a rise. Rather, the degrees in the humanities plummeted, while STEM field degrees shot up by about 60%:

All other majors had increases in baccalaureate degrees, with ten fields growing by 50% or more:

Colleges are struggling to keep students interested in the humanities, but for now with little avail:

Unless colleges in the United States want to follow the European model, where prospective students apply to specific degree programs instead of a given university, the choices of American students will likely always shift with the winds of employment. Some studies suggest that many of the tasks done by humans in stem fields will be automated in the future; robots may well end up writing most programming and intelligent algorithms. So if elite colleges just wait long enough, perhaps the humanities will make a comeback as humans look for the kind of knowledge that helps them complement rather than compete with technology.

Ivy League schools have not seen as precipitous a decline in humanities majors, though––specifically history. The Daily Beast opines that this is bad for the future of America:

An epidemic of historical amnesia already plagues this country, which has often paid a terrible price and done grave harm to other foreign people and lands due to its ignorance of the past. Orwell could have written that those who study the past control the future. The rich and privileged already own vast swathes of America and can look to a comfortable future. Can we afford their taking control of the past too?

I’m not sure the doom-and-gloom tone is necessary. As a university humanities instructor, I deal with lots of STEM students who take my courses for prerequisites. They’re not the best writers or readers (because they haven’t been trained to be), but they’re bright and my courses help them improve. Instead of lamenting lack of majors, we should bolster humanities prerequisites and ensure that all instructors are excellent teachers.