Trump might quit COVID briefings because of negative press coverage 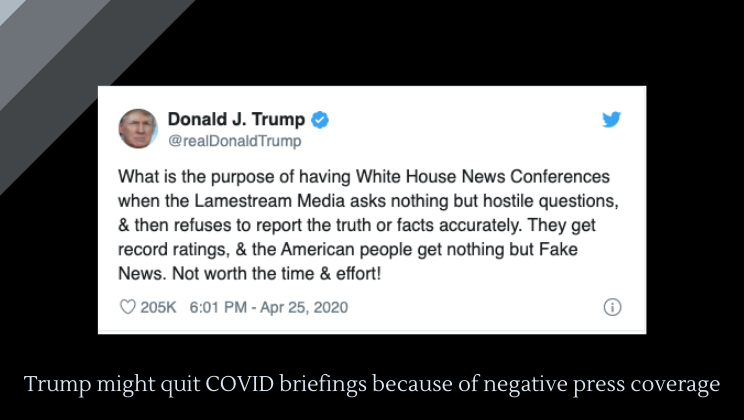 President Donald Trump has apparently reached his breaking point with his calamitous daily briefings. He tweeted:

What is the purpose of having White House News Conferences when the Lamestream Media asks nothing but hostile questions, & then refuses to report the truth or facts accurately. They get record ratings, & the American people get nothing but Fake News. Not worth the time & effort!

Trump has been getting very upset about the media coverage of his disastrous COVID updates. He’s watching TV for seven hours straight, behaving even more erratically, and cutting calls with advisors short.

Trump is right to be worried and angry.Trump’s ratings have dropped to pre-coronavirus levels, largely as a result of his daily briefings, and it’s no wonder––after the most recent meeting, in which Trump suggested the injection (as in, into your veins, where your blood lives) of disinfectant, those ratings are likely to suffer more. Manufacturers of bleach and other disinfectants are warning their consumers not to attempt to inject or injest any of their products or risk, you know, horribly painful death.