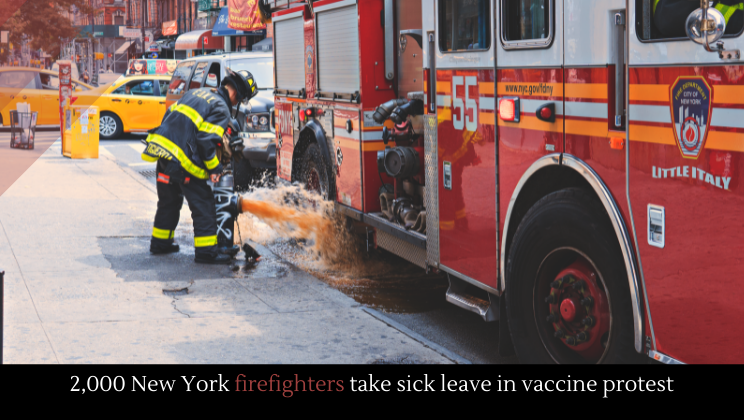 Six New York City firefighters were suspending for taking a truck to threaten NY senator’s staffers over vaccine mandates, part of a nationwide series of protests by employees forced to be vaccinated.

Thirty-five percent of the Chicago police force have not reported their vaccine status by the October 15 deadline. They risk being put on no-pay status. Two weeks ago, it half of Chicago officers were facing unpaid leave if they indeed refuse the vaccine. They were goaded on by the head of the Chicago police union, who urged Windy Cindy cops to defy COVID vaccine mandates

There is growing frustration with vaccine mandates. Texas Governor Gregg Abbott has outlawed all vaccine mandates with an executive order, including enacted by private corporations. The move is an open attack on Biden’s own executive order. For their own part, two Texas-based airlines––American and Southwest––will not abide by Gregg Abbott’s mandate.

Southwest has recently become the latest airline to require vaccines, joining an ever-growing number of organizations doing so. In fact, nearly ever major airline is now requiring vaccines for employees.

Almost all Fox News employees have now been vaccinated, even as hosts go on the air and cast doubt on vaccine efficacy.

The US Army mandated that all active duty soldiers must be vaccinated by December 15. Meanwhile, police in Los Angeles are suing over vaccine mandates, while officers elsewhere in the state are threatening to quit.

Mobile vaccine units in Colorado will now have security details. People have been harassing the details for some time, but recently things have turned more violent. Elsewhere, vaccine and mask mandates are leading to violence.

Police were called to the scene of an Arizona school, where a father threatened to zip tie principal over a COVID quarantine policy. A vocal anti-mask father in Florida has been charged with child abuse after pushing a young girl and twisting her arm. The father was apparently trying to perform some kind of publicity student by recording his daughter try to walk into school without a mask on. Another girl complained about the father, who had been protesting masks for some time, and tried to grab his phone. That’s when he threw her up against a fence and twisted her arm.

Conflicts over masks and vaccines are becoming increasingly tense, violent around the country, the AP reports. Protestors in Hawaii, for example, are harassing the lieutenant governor over vaccine requirements.

Texas Governor Greg Abbott, who famously forbade mask mandates, has tested positive for COVID. Schools, meanwhile, are trying to circumvent that mandate. One school district has done so by making masks a part of the dress code. Other school districts are seeing outright violence. In Austin, a parent ripped the mask off a teacher.

COVID is wreaking havoc on southern schools. Some districts, like the Dallas district, are defying state orders against mask mandates and requiring students, teachers, or both to wear masks. Unfortunately, children in South Carolina and Mississippi are dying of COVID, with schools starting now or setting to start soon.

As cases of COVID “skyrocket” in Mississippi, the state is forced to reopen a field hospital in a parking garage. According to a healthcare expert, COVID is breaking our healthcare system. Oklahoma hospitals are out of space, and there are no pediatric ICU beds in north Texas. A man in Houston, who was shot six times last week, is still waiting for surgery because there are simply no beds available. Hospitals in Florida in Mississippi are reaching a breaking point as they’re overrun with critical COVID patients. Even as the Feds might have to rush in to help these hospitals, citizens in other states with high COVID rates, like Tennessee, are protesting masks and heckling mask supporters.