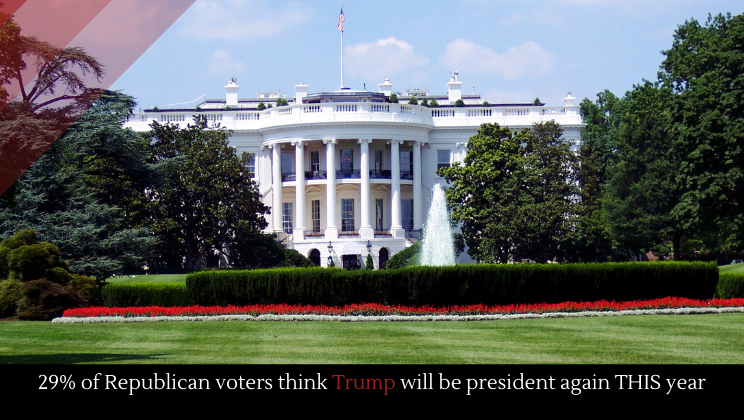 A baffling 29% of Republican voters think it is very likely (17%) or somewhat likely (12%) that Trump will be reinstated as president this year.

Republicans have successfully blocked a probe into the Capitol riot, signaling continued loyalty to Trump and preventing any negative association between Trump and the riots from reaching his most devout followers.

Such staggering numbers are also likely result from the QAnon conspiracy theory seems to be working its way ever deeper into the Republican Party. At CPAC, for example, multiple Q supporters spoke from the stage, and one even supported the theory from it. Meanwhile, a former QAnon supporter has called the movement a terrorist group.

The infamous QAnon Shaman has claimed, through his lawyer, that he was “groomed” by Trump’s “public propaganda.” The claim came as part of his bid to get out of jail.

As late as February, the most devoted members of the Q Movement still think that Trump is president, and that he will somehow be inaugurated on March 4 (which is when presidents used to be inaugurated…75 years ago). Officials are now worried that these supporters will once more try to storm the Capitol, and so the National Guard has been activated.