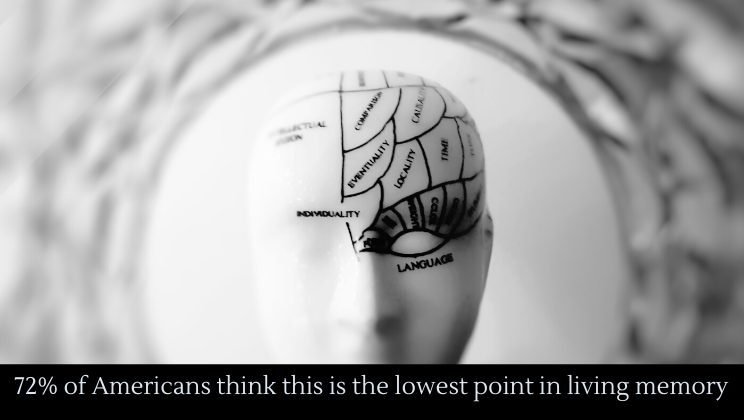 A majority of Americans––72%––think that this is the lowest point in living memory for our country, and 83% say that the future of the nation causes them significant stress.

A majority of Republicans, 63%, think that the country is heading in the wrong direction. That’s up about 20% since last month. This is not good news for Trump, since general unhappiness with the direction of the country under his leadership points to losing the White House in 2020. Some Republicans are worried that Trump’s numbers are so bad that they might drag the whole party down with him, leading to Democratic landslide.

According to a Michigan pollster, Trump’s Bible photo op was a total catastrophe, leading to an immediate dip in his numbers. The now infamous (and embarrassing) Bible photo-op was an obvious attempt to pander to his religious base. Unfortunately, he’s off the mark. Only some 27% of Americans somewhat or strongly agree that Trump is religious. Meanwhile, 55% either somewhat or strongly disagree. Among evangelicals, less than half, 40%, see Trump as religious, while another 33% disagreed. That means Trump’s Bible gambit may go down in history as one of the stupidest moves in modern political history.