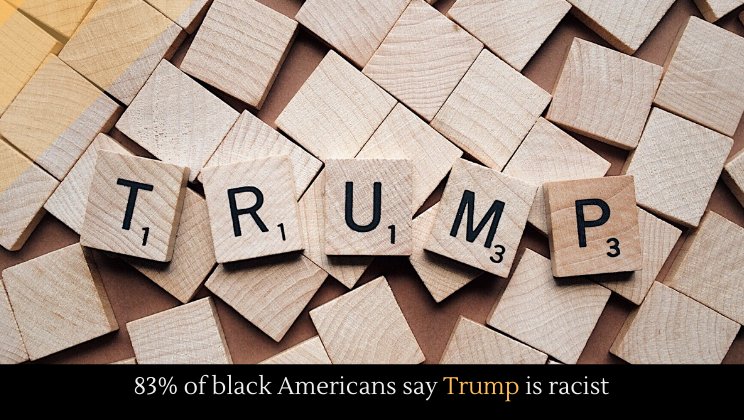 A new Washington Post-Ipsos poll found that 83% of black Americans believe Trump is a racist.

According to those on the left side of the political spectrum, Donald Trump is a flaming racist, and the only thing that could make his racism more obvious would be a Ku Klux Klan hood. Those on the right end of the political spectrum, however, thing that charges of racism are overblown, unproven, and blatantly partisan attempts at discrediting Trump. In this post, we’ll explore Trump’s tangled, often confusing history with race and racial tensions, and we’ll try to do so without partisan bias.

Other media outlets have already done this. Snopes, for example, tackled memes that placed Trump alongside black people and claimed that he had never been accused of racism before running for president.

Snopes called the meme false, citing several instances involving race. For example, in 1973 the Trump Management Corporation was sued for violating the Fair Housing Act. He also took heat for his 1989 ad about the Central Park Five in the New York Times. In 1991, a former employee accused Trump of using racial slurs. In 1993, Trump said ““They don’t look like Indians to me and they don’t look like Indians to Indians,” in a testimony before the House Native American Affairs Subcommittee. In all of these cases––and more––Trump was accused of racism.

PBS has also listed times that Trump was involved in tense racial issues. Many were the same as the Snopes article, particularly the Central Park Five instance. Others were new, such as tweets Trump wrote about Mexico sending “criminals” to the United States or mocking a vaguely Asian accent. The PBS list is exhaustive, to say the least. Their point is this: “While Trump’s actions have landed on both sides of racial currents, his public record depicts a man who most often moves in one direction: overlooking racial sensitivity and concerns in the name of fighting ‘political correctness.’”

Other outlets (particularly left-leaning ones) have blatantly called Trump racist––or something close to it. The Dayton Daily News said that Trump didn’t mind sounding like a racist, even if he wasn’t one. A potential Democratic presidential candidate, Senator Sherrod Brown, recently said that Trump was definitively racist.

The problem with all of these articles is simple: they never define race or racism. Race and racism are concepts that seem obvious, but the problem is that people aren’t all necessarily in agreement about what they mean. Let’s use this definition for race: the notion that groups of people that look alike share non-biological characteristics. Then let’s define racism as: the assumption that “races” exist, and that some races are inferior to others.

So based on that definition, is Trump racist? Well, it seems that he assumes that groups of people who look similar have similar characteristics––see his comment about Native Americans––but whether he believes that those traits are passed through bloodlines is hard to say. It’s hard to say that unless he explicitly says that sort of thing, which he doesn’t. It’s also hard to say with certainty that he believes some races are superior to other, although his unwillingness to condemn white supremacists in Charleston raised some eyebrows.

So is he a racist? Who knows. Is he a jerk? Definitely. Let’s be precise in our language.