Beto did a Reddit AMA; it was a massacre 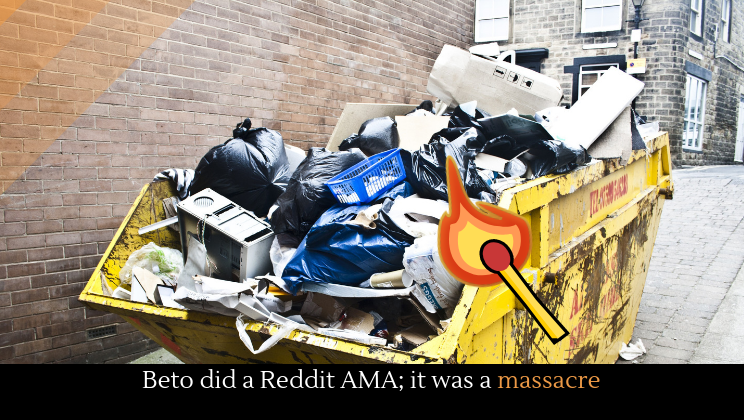 Beto O’Rourke, the hip candidate who drops f-bombs and profanity-laden campaign tee shirts to prove it, did an AMA on Reddit this week. It did not go well, to say the least.

First of all, only 54% of users upvoted the AMA post, which is pretty low. A Popeye’s employee beat that, as did a guy who does autopsies and livestreams them. Almost a year ago, Bernie Sanders did one, and 70% of users upvoted him.

So, what went wrong? Well, for one thing, it doesn’t seem like redditors like Beto’s political nonanswers. One person took Beto to task for avoiding a question:

“Beto, I do have tremendous respect for you as a person and as an individual. I think you are passionate and I was struck by you during the debate with Ted Cruz and how well you did in your native Texas. But this was really a shit response and really didn’t hit at the crux of my questions.”

In one answer, Beto’s said he planned to legalize marijuana and cancel the drug war. User’s weren’t buying it:

“Legalizing Marijuana is one thing, but changing the very nature of the drug war such as what you propose will also require some fairly substantial changes in how we handle health care as a nation as well. I don’t believe you can just shift the burden of dealing with addictions from one giant profiteering industry to an even larger giant profiteering industry and expect things to just go smoothly. You will need to have the framework in place to support rehabilitation and addiction treatments before ending the war on drugs and as we’ve all already seen so far, Congress can’t pull their heads out of their asses when it comes to shaking up the health care industry. At best we’ll end up with two or more broken systems instead of a single functional one.”

What about his AR-15 plan? Oh boy, did reddit hate that:

“You are just another politician who has no idea how firearms work, and how to actually look up the facts on gun violence. Instead of going at people’s heartstrings and trying to strip rights, how about putting some thought into it, and bring up some actual proposals. Proposals that are rooted in reality.”

When someone asked why Beto wasn’t running for Senate, he said: “I’m running for President. I want to be the leader that we need and are missing right now. Healing instead of inflaming. Bringing us together instead of driving us further apart. Confident about the future and our role in it – not walling us off from the rest of the world, or putting kids in cages or turning our back on the greatest challenge we’ve ever faced, climate. I’m confident as a country we are up to this moment —but it’s going to take all of us… cant do it with half steps or half measures or only half the country. I’ve shown that I can bring people in and together.. in Texas we won more votes than any other democrat in the history of the state, won independents for the first time in decades, young voters turned out in record numbers.. we are campaining like that across the country, connecting with people by showing that no one’s written off, no one’s taken for granted. That’s how we can win the 38 electoral college votes in texas, that’s how we win across this country, that’s how we defeat donald trump, and that’s how we bring a very divided country back together”

Cool, except that it got more than negative 2500 votes. That means all positive votes were canceled out, and then it started accruing downvotes.

On Beto’s own subreddit (or forum), a summary of his AMA had zero points––only 44% of people liked it. Members of the subreddit believe that outsiders flooded in to downvote it, but anyway you slice it that AMA was a dumpster fire.