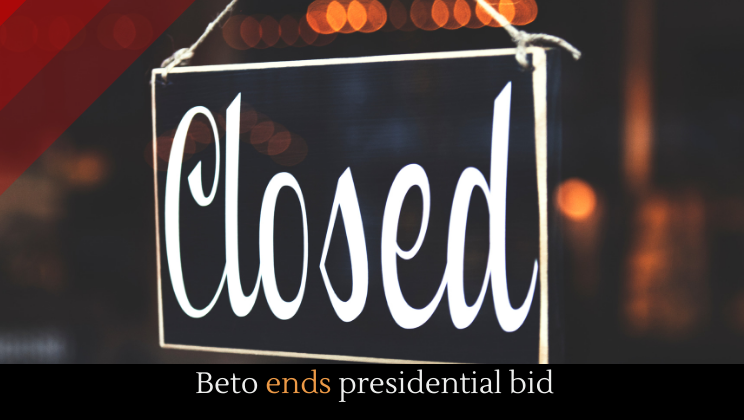 Beto O’Rourke has, finally, ended his presidential bid. Although Beto fought a good fight, his polling numbers have been very low for the past four months. It was a brave move to be the first to leave the campaign trail, and he should be commended for that.

In December of 2018, Alltop suggested that Beto O’Rourke should not run for president. First, because he’s not inspiring––and that’s according to a Texas progressive! O’Rouke, according to that Washington Post piece, is too middle of the road to stand out. He won’t capture progressives, and he’s going to remind everyone of Hilary Clitonesque politics. He presents like Bernie Sanders, but he reads like Clinton. That is not a winning combination. Second, O’Rourke lost in his Texas senatorial bid. Trump’s attack on O’Rourke is ready-made: He’s a loser. It’s going to be hard to convince swing voters to cast their ballot for someone who didn’t win.

Beto nevertheless announced a bid, and it did not start well. The first problem was his wife’s silence during the announcement video. She sat quietly, gazing lovingly at her husband and smiling, for the entire video. Observers point out that the silent-wife routine does not fit into a candidate pool with powerful women leaders. Then critics accused Beto of having a huge ego, the result of white male entitlement. Other accused him of being a “poor man’s Obama.”

Beto himself soon increased his own problems by making inappropriate jokes about his marriage, white privilege, and his teen hobbies. He has made public apologies and vowed to be more thoughtful. He admitted to benefitting from white privilege.

Now, unsurprisingly, Beto O’Rourke’s campaign fizzled out, thanks partly to his ego, partly to his inability to appeal to women, and partly because he’s simply the right guy for the job, even he feels he was “born to be in it.”

Despite the few blips cropping up on the radar––like when he defended Buttigieg after the latter was heckled, or like when he finally called for Trump’s impeachment––Beto’s campaign tells us that we’re in a different era.