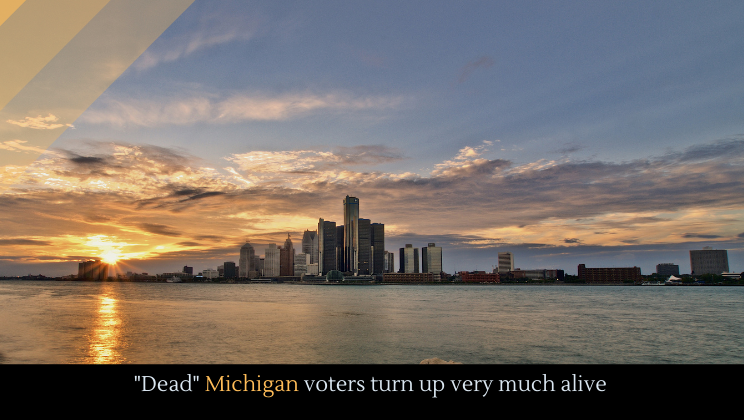 Trump supporters have claimed that some 10,000 absentee ballots came from deceased people in Michigan. The BBC investigated and, surprise surprise, those people actually aren’t dead. So what happened? Basically, bad research. It’s surprising that Trump supporters are spending so much time trying to “prove” fraud, when, according to the Department of Homeland Security, the 2020 election was the most secure in American history.

Despite this, major Republicans have backed Trump’s foolish claims that the election wasn’t legitimate. And by doing that, they’re enabling his stupid march towards authoritarianism. At the very least, the GOP is undermining faith in democracy––and what’s worse, GOP senators are taking his lead and refusing to concede races they obviously lost.

Donald Trump has fired his Defense Secretary, Mark Esper. Nancy Pelosi believes that this may be the first example of Trump’s “scorched earth” (or “bull in a china shop”) exit strategy.

The 75 million Americans who voted for Joe Biden are celebrating their victory, but they’re also growing increasingly worried of what Donald Trump is going to do as he leaves office. Trump’s own niece is worried that he’s going to spend the next several months breaking whatever he can, and she’s positive he won’t help the transition. Trump set up an election fraud hotline for people to expose any vote tampering, but Biden supporters are using that hotline to leave taunting messages for Trump. That’s the exact kind of thing that’s going to spur Trump to more recklessness. Psychologists are worried that Trump, a notoriously sore loser, is going to suffer a kind of psychic death after his defeat and lash out.

A former director of the CIA is worried that Trump will rile up his base and possibly drive them to violence. Even though his aides tell him the legal assaults will be useless, he intends to throw every lawsuit at the wall in the hopes that one sticks.  Weirdly, Trump seems to be pretending that everything is normal. He’s tweeting that he’s won the race, and he spent Saturday golfing, like he did for most of his presidency.