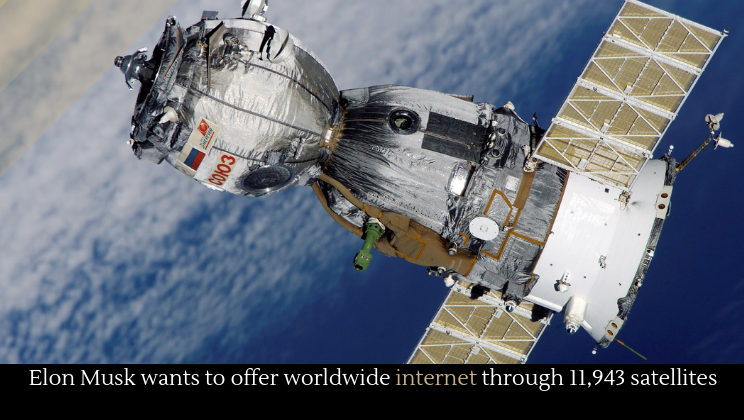 Elon Musk is hoping to launch 11,943 satellites in order to offer global, high speed internet. He hopes that the system, which he calls Starlink, will provide income to keep SpaceX building and launching new rockets. Critics have already drawn comparisons to the villain in Kingsman who offered global internet as a means to destroy the world.

At first blush, Musk’s plan seems great, but given his past behavior one must wonder if there’s an ulterior motive. Historically, Musk has thrown up a smokescreen every time his companies are in trouble. Tesla, for one, is in major trouble. T. Rowe Price just dumped 81% of its stock and another Tesla driving in autopilot mode caused a deadly crash. It’s possible that Musk is using SpaceX as a distraction for Tesla––it’s also possible that SpaceX is in some kind of trouble.

Musk relies on a cult of personality for his success. He’s cultivated a sort of Tony Stark image,dramatically sending a (useless) submarine to Thailand to save those kids trapped in a cave. He then fired off a tweet calling one of the rescuers a pedophile. Last week, his reckless tweeting led to a federal investigation. He claimed––allegedly while on acid––that he was considering taking Tesla private. Stocks soared, then plummeted after the fallout. And then again after the Times interview.

Elon Musk has turned himself into a one-man gossip machine. The Times interview was actually a stroke of genius, nevermind the fact that Tesla stocks fell. This author thinks that Musk wanted that. He also wants rumors flying around that he’s tweeting while tripping on acid or loopy on Ambien. He wants to do dramatic things like promise to save Flint, Michigan. This global internet network smells like that.