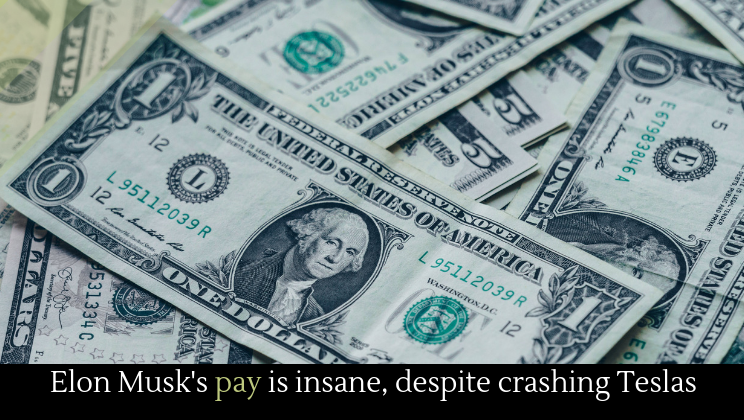 Elon Musk’s pay as CEO of Tesla is so huge that the New York Times had to alter its annual report of CEO salaries to accommodate it. It’s large that it’s over 40,000 times the median Tesla salary. How much does he make? Brace yourself: $2.3 billion. With a B. That’s More than the 65 people below him on the list of best-paid CEOs combined.

This is pretty mind-boggling considering Tesla is bleeding money and its stock price is in the tubes. But it’s extra surprising because Teslas keep crashing into immobile objects. Earlier this week, a Tesla crashed into a stalled car. So despite bleeding cash, stock problems, and crashes, Musk makes more than anyone reading this will likely ever make. How?

Musk relies on a cult of personality for his success. He’s cultivated a sort of Tony Stark image, dramatically sending a (useless) submarine to Thailand to save those kids trapped in a cave. He then fired off a tweet calling one of the rescuers a pedophile. Last week, his reckless tweeting led to a federal investigation. He claimed––allegedly while on acid––that he was considering taking Tesla private. Stocks soared, then plummeted after the fallout. And then again after a beguiling interview with the New York Times..

Elon Musk has turned himself into a one-man gossip machine. The Times interview was actually a stroke of genius, nevermind the fact that Tesla stocks fell. This author thinks that Musk wanted that. He also wants rumors flying around that he’s tweeting while tripping on acid or loopy on Ambien. He wants to do dramatic things like promise to save Flint, Michigan.