Hong Kong protestor shot with live round for first time 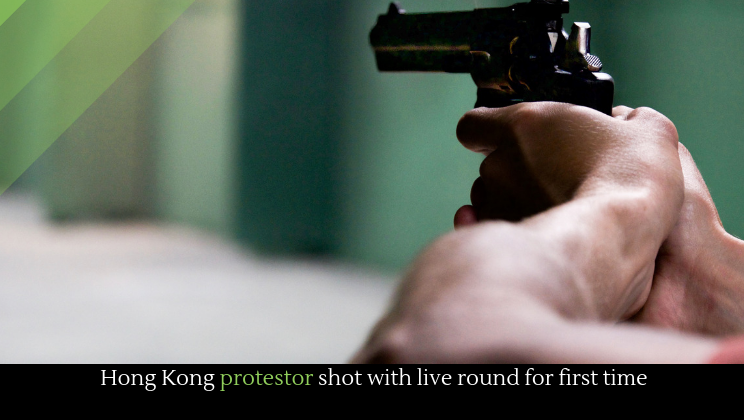 For the first time since protests began in Hong Kong several months ago, police have shot a protestor with a live round. The victim was a teenager, whom the police shot in the shoulder. According to the police, the victim was conscious when he was transported to the hospital.

This may represent a potentially dangerous escalation for the protests. China has doubled the number of troops in Hong Kong, bringing the number of troops to somewhere near 12,000. It is difficult to tell the exact number of troops, however, because China disguised their entry. Since China took control of Hong Kong in 1997, it has regularly rotated troops through the reason, with a steady level of around 6,000 being the norm. But last month, observers noticed, more troops came in as per usual but none left.

Although China did not mention the pro-democracy protests, the ongoing agitation is obviously that cause of the massing troops. A recently-released protest song, released on YouTube a few weeks ago, is quickly becoming an unofficial national anthem in Hong Kong. The song speaks of freedom, liberty, and democracy. And, as you can hear below, it’s pretty rousing––so rousing, in fact, that people are spontaneously singing it in public places, risking the wrath of Beijing.

The protests in Hong Kong are inspiring Beijing to employ increasingly despotic measures. Police in Hong Kong have recently started adding blue dye to the fire hoses they use to spray the protestors. The dye sticks to the protestors, making them easy to find and arrest later. Protestors are responding to the police’s abuse by ramping up their own activities. They recently shut down train service.

The Chinese government arrested Hong Kong protest leaders in order to stifle weekend rallies. The protestors have all agitated for Democracy. The Chinese media has said that Hong Kong protestors are “asking for self-destruction.” They also released a video of the Chinese military amassing near the city’s border. Despite the appearance of democratization, the China is still very much an autocracy.