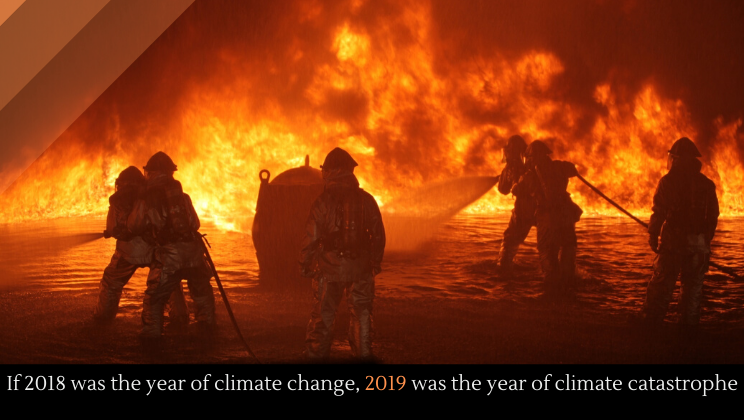 David Leonhardt, New York Times op-ed columnist, listed his top stories of 2018. Looking back from the end of 2019, you might guess his top story was about Trump. But it wasn’t:

In another article, he chronicles the harsh realities of climate change:

In 2018, heat waves killed people in Montreal, Karachi, Tokyo and elsewhere. Extreme rain battered North Carolina and the Indian state of Kerala. The Horn of Africa suffered from drought. Large swaths of the American West burned. When I was in Portland, Ore., this summer, the air quality — from nearby wildfires — was among the worst in the world. It would have been healthier to be breathing outdoors in Beijing or Mumbai.

That was 2018. What about 2019? Just look at the news coming from Australia as the year ends: the country is literally burning to the ground. The images coming out of the country depict “armageddon.” An estimated 500 million animals have been killed in the fires. The fires are so bad they’re creating their own weather. Thousands of Australians are trapped on beaches trying to escape the fires, which are now approaching Melbourne suburbs. Elsewhere, in villages in the state of Victoria, citizens are being warned that it’s too late to escape, and they must stay inside.