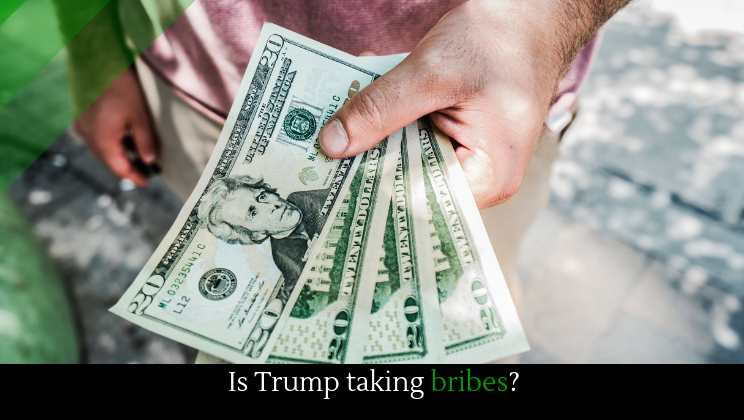 A strange thing is happening at Trump hotels. Rooms are being booked––at least one room was booked by a foreign government––but no one is staying in them. This raises the specter of bribery. As Gerry Connolly, a member of the House Oversight Committee, has said, “Now we’re looking at near raw bribery.”

There is mounting evidence of bribery and corruption against Trump. The White House, in conjunction with the Department of Justice, withheld a whistleblower case from Congress, sparking accusations of corruption. Trump dismissed it as “fake news:”

“Another Fake News story out there – It never ends! Virtually anytime I speak on the phone to a foreign leader, I understand that there may be many people listening from various U.S. agencies, not to mention those from the other country itself. No problem! Knowing all of this, is anybody dumb enough to believe that I would say something inappropriate with a foreign leader while on such a potentially ‘heavily populated’ call. I would only do what is right anyway, and only do good for the USA!”

Except…it’s not fake news. The whistleblower case exists, it’s real. And, as CNN points out, the revelations within the case may be “explosive.”

Trump has struggled with accusations of corruption on a variety of fronts recently. In Spring of 2019, an Air National Guard crew took a routine trip from the United States to Kuwait, bringing supplies. But on this particular trip, something unusual happened: the crew stopped at a Trump resort outside Glasgow, Scotland––both ways. The House Oversight Committee is currently investigating why the Air National Guard C-17 stopped in Scotland as part of broader investigations into how government stays at Trump resorts.