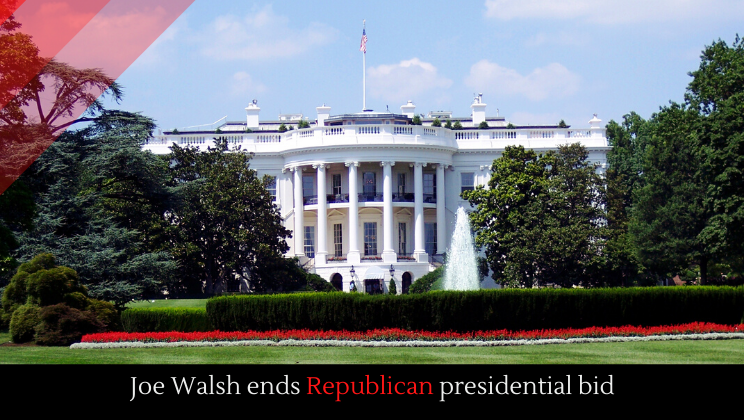 Joe Walsh has ended his primary challenge against Donald Trump.

“I am ending my candidacy for president of the United States,” Walsh said, “I got into this because I thought it was really important that there was a Republican — a Republican — out there every day calling out this president for how unfit he is.”

Walsh went on to call Trump “literally…the greatest threat to this country right now. Any Democrat would be better than Trump in the White House,”

Walsh fought an uphill battle throughout his campaign, not least against the pro-Trump conservative media. He accused Fox News and conservative radio of lying to the American people about the impeachment investigations into Trump.

“The vast majority of the American people understand that when it comes to Ukraine, [Trump] did something wrong,’ Walsh said. “But those people who listen to the opinion shows on Fox and those people who listen to my former world, conservative talk radio, have no clue because they’re being told every day: ‘He’s done nothing wrong’ … It’s dangerous.”

That wasn’t the first time Walsh took issue with his own side of the aisle, and he’s not one to mince words. Walsh was outraged when states began to cancel their presidential primaries. He called the GOP a “cult” that is “is all about washing their leaders’ feet every day.”

The GOP responded by saying that the party of the incumbent president often cancels primaries, but Trump’s challengers are not having it. Former Rep. Joe Walsh, one of those challengers, said that “Trump and his allies and the Republican National Committee are doing whatever they can do to eliminate primaries in certain states and make it very difficult for primary challengers to get on the ballot in a number of states. It’s wrong, the RNC should be ashamed of itself, and I think it does show that Trump is afraid of a serious primary challenge because he knows his support is very soft.”