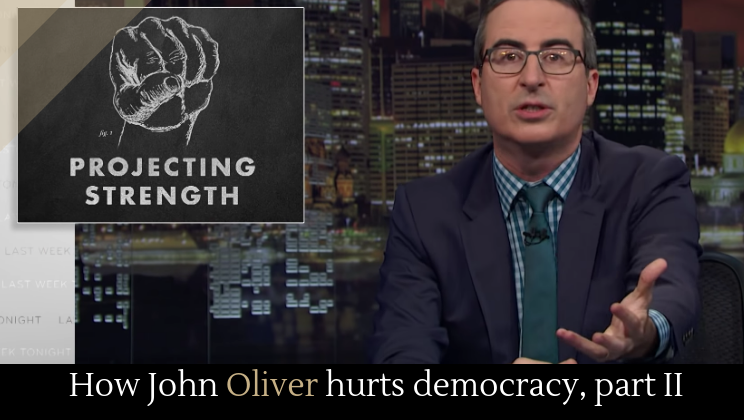 I recently published an article that got a lot of criticism. In it, I argued that John Oliver’s Last Week Tonight actually hurts democracy. It does so perhaps unintentionally, but in its attempts to be both funny and informative, I suggested it made some errors. Between comments calling me an idiot, a moron, etc., a few correctly pointed out that I lazily made my claim and offered no evidence to support it. They were right. In this article, I will more clearly state my case: John Oliver hurts democracy. That case will not come in the form of statistics (what statistics would prove such a point?) or quotes from disaffected Americans blaming Oliver for their lack of civic participation (who could pin their disengagement to a single factor?). Instead, I make my case by arguing it.

This argument is not meant to suggest:

This argument is meant to suggest:

What is a healthy democracy?

In order to understand what it means to hurt democracy, we need to agree upon an “unhurt,” or an ideal democracy. And we should also set aside the fact that America is a republic (since we elect representatives), and not a direct democracy (since every single person doesn’t vote for every single issue)––at least, we should set it aside for now. Here are some things that, hopefully, we can all agree are necessary for a healthy democracy:

I think Oliver, in one way or another, hurts each of these points.

Hopefully that explains the previous post a bit more. I look forward to reading your comments. I’ll close with words from Mario Vargas Llosa’s Notes on the Death of Culture: “The buffoons and the comedians, who have become the maîtres à penser of contemporary society, speak the way they act: nothing strange about that. Their opinions purport to adhere to supposedly progressive ideas but, in reality, they merely repeat a snobbish left-wing script: stirring up trouble, giving people something to gossip about.”