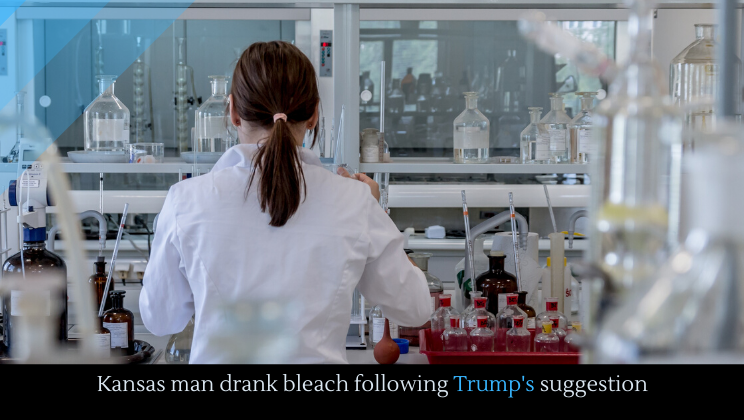 A man in Kansas has drunk bleach based on “advice” he’d gotten. He did not identify who gave him the advice, but he drank the bleach after Trump suggested it in one of his briefings. Trump takes no responsibility, as per usual. (Howard Stern, by the way, encourages more Trump supporters to try the bleach cure)

Trump’s ratings have dropped to pre-coronavirus levels, largely as a result of his daily briefings, and it’s no wonder––after the most recent meeting, in which Trump suggested the injection (as in, into your veins, where your blood lives) of disinfectant, those ratings are likely to suffer more. Manufacturers of bleach and other disinfectants are warning their consumers not to attempt to inject or injest any of their products or risk, you know, horribly painful death.

3M criticized Trump’s order on humanitarian grounds, and Ontario Premier Doug Ford said that Canada will begin producing N96 masks, which it will not sell to the U.S. He also severely criticized the U.S. president.

International media organizations are increasingly attacking Trump for his handling of the pandemic. The Independent thinks that the United States is going to lose its superpower status forever because of Trump’s bungling. In a meeting of international leaders, the Trump administration tried to convince everyone to call COVID the “Wuhan Virus.” Pick your battles, dude.