Leaked documents reveal that Facebook is evil, surprising no one 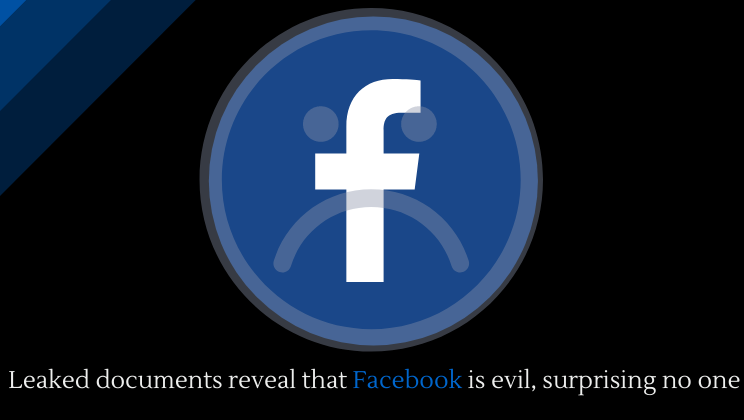 It’s come to the point where Mark Zuckerberg could peel off his (obviously fake) flesh to reveal fiery red demon skin below and openly admit to creating Facebook at the behest of Satan himself and still no one would bat an eye.

For example, CNET recently said not to buy a Facebook product because the company’s privacy abuses were terrible and it blatantly ignores the havoc its political ads cause. The comments on the article were overwhelming: keep “politics” out of tech reviews.

The text itself revolves around two issues: 1) Facebook’s flagrant misuse and poor handling of user data, and 2) Facebook’s unwillingness to confront its own role in shaping the political climate. The latter is not inherently a political stance, and I also reject the claim that it’s not relevant to the technology in question. It absolutely is relevant to the technology! It’s like reviewing a homemade pipe bomb without ever asking the question, “So…what’s your plan with the bomb?”

Facebook has made it clear that it doesn’t care what happens with the bomb, as long as Facebook keeps growing and making money. It’s hard to blame it for that––it’s a big corporation, that’s its whole purpose in life. That doesn’t mean, though, that the implications of its technology should (or even can) be ignored. Indeed, because of Facebook’s close ties with the political climate, it makes the questions the author addressed even more important.

But, for some reason I haven’t figured out yet, the mob has yet to turn on Facebook like they did Microsoft back in the day. But maybe the thousands of pages of leaked documents will help? They reveal how brutal Facebook’s business tactics have been, how they abused user data, and how they generally do what they want.

Who knows, though. Facebook has also been the subject of impotent outrage after it included the infamous news site Breitbart on its new “high quality” news tab. That news outlet has been widely criticized for posting extremist, “alt-right” content and conspiracy theories.