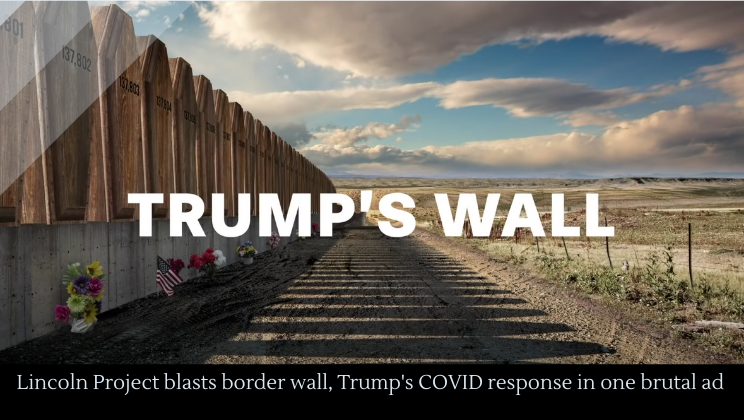 While Eric Trump was making preposterous claims about Trump bringing peace to the Middle East (while his brother Don Jr. was secretly telling people that his father is going to get “really hurt”), the Lincoln Project was busy brutalizing the Trump campaign with this ad, which depicts Trump’s infamous border wall as a line of caskets containing COVID dead.

In July, the Lincoln Project took aim at the senators who, the Project believes, are more loyal to Trump than their country. Republican insiders have already vocalized concerns about losing the Senate in 2020. With a handful of states vulnerable, including Maine and North Caroline, the Senate could swing blue. They’re right to worry. President Trump’s approval rating has fallen one percent from April, while his disapproval rating has risen two percent to 51%. Approval ratings for Trump’s handling of COVID is worse. Only 42% of Americans approve of his performance, down from 50% in March. 51% of Americans say he’s doing a bad job, up from 45% in March.

Trump is railing against them, calling them “stupid people.” Some observers––Republican operatives––think Trump might just quit rather than lose, which would effective screw the GOP.