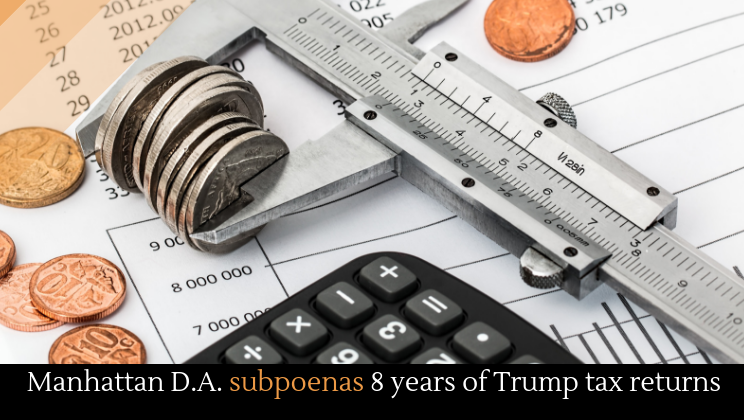 New York state prosecutors have demanded eight years worth of personal and corporate taxes from Donald Trump. The move joins a much wider effort to get Trump to release his taxes.

Several states have threatened to block Trump from the 2020 ballot if he does not release his tax returns. California has just passed a law that will prevent Trump from appearing on the ballot.

Governor Newsom, who signed the bill that became effective immediately, said, “As one of the largest economies in the world and home to one in nine Americans eligible to vote, California has a special responsibility to require this information of presidential and gubernatorial candidates. These are extraordinary times and states have a legal and moral duty to do everything in their power to ensure leaders seeking the highest offices meet minimal standards, and to restore public confidence. The disclosure required by this bill will shed light on conflicts of interest, self-dealing, or influence from domestic and foreign business interest.”

The law is likely to face legal challenges.

The Illinois State Senate passed legislation that will bar President Trump from the 2020 ballot unless Trump releases his tax returns. The bill still needs to make it through the House, which is controlled by Democrats. Then it will need to be approved by the Illinois governor…who is also Democrat. The governor has not yet weighed in on the issue, but it seems likely that he will sign it.

Illinois state Sen. Tony Munoz has said, “If you want to run for vice president or president of the United States, hey, what’s wrong with providing your tax returns for the past five years? If you’ve got nothing to hide, you shouldn’t worry about anything. That’s how I see it.”