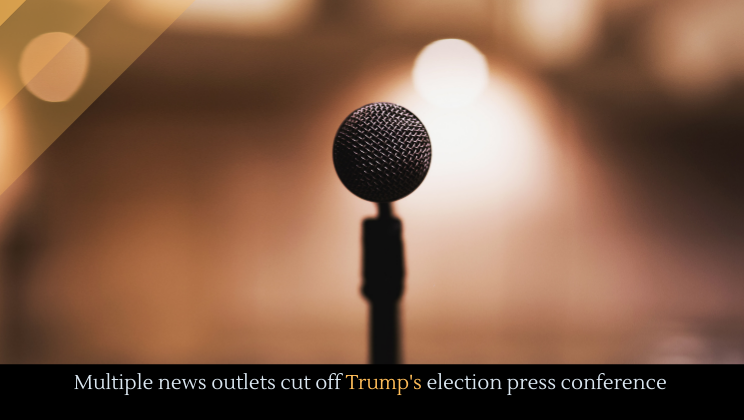 MSNBC, CBS, NBC, and NPR all cut away from Trump’s election press conference, citing its dishonesty, inflammatory intent, and overall insanity. In the conference, Trump made accusations of voter fraud, attacked his enemies, and undermined the foundations of democracy. Overall, I try not to be partisan, but it’s simply jaw-dropping that the occupant of the highest office in the land is such a poor loser that he would go on national television and makes claims so banana-pants that networks would cut him off––and they were right to do it.

Even Fox News, his biggest fan, isn’t on board with him. Their coverage of his bullsh*ttery was sparse at best. The only article on their homepage focuses on the GOP’s distancing itself from Trump. If you search for it, you get this piece, which is full of Trump quotes. The video accompaniment is interesting, though, and generally I hate popup videos on news sites. Those videos, if you watch them, suggest that even Fox News is fed up with Trump’s nonsense.

Both CNN and MSNBC stopping covering Trump’s full COVID briefings (remember when he was doing those? Ah, for the good old says), either editing out Trump’s diversions or cutting early. Pressure is mounting as more and more people criticize Trump’s handling of the COVID crisis. Adam Schiff called for an investigation. Even Obama has subtly criticized Trump’s handling of the crisis.

The Independent suggested that the United States will lose its superpower status forever because of Trump’s bungling. In a meeting of international leaders, the Trump administration tried to convince everyone to call COVID the “Wuhan Virus.” Pick your battles, dude.