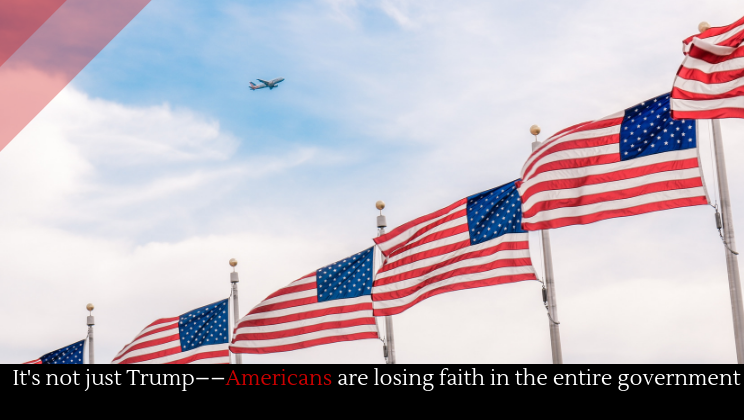 There’s a phrase I use a lot. I picked it up from a buddy of mine who works at FEMA and used to work at the Department of Veterans Affairs. I use this phrase when something doesn’t need to be perfect, it just needs to be done: “It’s good enough for government.” When you think about it, it’s kind of sad that this phrase exists. It implies that any work one does for the government is inherently subpar. It just needs to be good enough to get by, and the standard for “getting by” is pretty low. That’s what makes this recent CNN poll so tragic: four out of ten Americans think the current federal government is the worst they’ve ever seen. Only nineteen percent of respondents say that the government is doing a good job of governing.

When you look at some of the major issues facing the government, it’s easy to see why people are so negative on it. Take, for example, immigration. It’s all you hear about on the news, and the government actually shut down over the issue of immigration. Here’s the issue, though, 81% of Americans would like to see a pathway to citizenship for undocumented immigrants. Sixty percent disagree with the plan to build a wall––three percent higher than June 2018. The majority of Americans want to hire more border patrol agents, though.

From the outside, it seems like all of this has an easy solution: compromise. Higher more border patrol, get a bit creative with border security, and forget about the wall. In fact, fifty years ago that would have been a no-brainer. Now that political compromise has become a dirty word, however, politicians feel that they cannot make this seemingly easy, cross-the-aisle agreement.

Things aren’t likely to change with Trump’s fear-based leadership style. He’s used to trying to intimidate opponents in negotiations, and he’s used to winning the American people over through fear. That’s not likely to change, and as long as that’s the case, compromise will be a long time coming.

Between bouts of stirring up political frenzy, it seems that Trump spends sixty percent of his time doing…well, who knows what. Sources say that his “executive time” consists of watching TV or calling aides to find out about his reputation. He also uses that time to have off-the-record meetings, meetings that he tries to hide from aides in case they leak the meetings to the press. Trump’s unconventional political style may have been a draw for some votes, but it’s proving to be a challenge for the entire government.