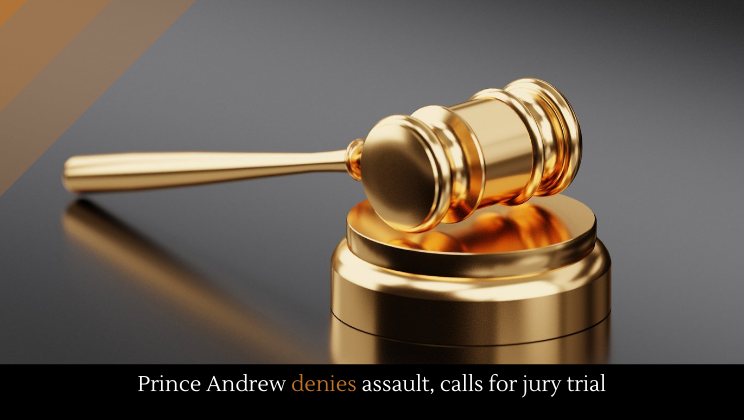 Prince Andrew has forcefully denied all the allegations made against him––that he assaulted the then-underage Virginia Giuffre, that he was close associates wtih Jeffery Epstein––and has demanded a jury trail to clear his name. Officials in Parliament are calling for Prince Andrew to pay for his own security amid a growing reaction against his sexual assault lawsuit. In light of the sexual assault case being brought against him Andrew’s military titles and charities have been returned to the Queen. A judge has ruled against Prince Andrew’s attempt to get his case dismissed, and Andrew will therefore face a civil sexual assault case in the US. Queen Elizabeth has refused to pay Prince Andrew’s legal bills, forcing him to sell his nearly $23m chalet in a hustle to fund his defense. A judge has denied Prince Andrew’s attempts to block Virginia Giuffre’s lawsuit. Andrew said that the lawsuit should not continue because Giuffre no longer lives in the United States. Similarly, a federal judge in Manhattan has said that Prince Andrew could face a court date in late 2022 for sexual abuse. In the meantime, Prince Andrew has been fighting to get the case thrown out––or at least hushed up. His lawyers have made an “unprecedented” request: Andrew wants all testimony, even his own, kept secret. Lawyers for an American woman who claims Prince Andrew sexually assaulted her have filed a lawsuit against him. For months, Prince Andrew, Queen Elizabeth’s third child, has refused to cooperate with an American inquiry into Jeffrey Epstein. The New York prosecutor is now pursuing other options to force Andrew’s cooperation. Barclay’s Chief Executive Jes Staley is being probed for his links to millionaire pedophile Jeffrey Epstein. U.K. regulator the Financial Conduct Authority is conducting the investigation, but Barclay’s internal investigation has cleared Staley. The FBI is investigating Ghislaine Maxwell and several others who allegedly facilitated Epstein’s criminal behavior. Virginia Giuffre, in her first UK interview, told the BBC that she stands by her claim that Prince Andrew sexually abused her, and Jeffrey Epstein trafficked her. Her interview was in response to Prince Andrew’s public denial on the BBC, in which he bizarrely claimed that he cannot sweat––a rebuttal to her claim that he sweated all over her. Giuffre’s claims brought new attention to Ghislaine Maxwell’s role as a lead recruiter and trafficker in Epstein’s sex ring. Prince Andrew, Queen Elizabeth’s son, may have already stepped down from his charity, Pitch&Palace, as major donors withdraw support over his ties to Jeffrey Epstein. Prince Andrew already stepped down from his royal duties, following a BBC interview that sparked international backlash. Viewers said that Prince Andrew’s did not seem to express sympathy for the victims and gave unconvincing denials of sexual misconduct. The interview was so bad that experts on the royal family say it is the biggest PR nightmare since Princess Diana’s death in 1997. Epstein accuser Virginia Roberts Giuffre has already publicly said that she was trafficked to Prince Andrew in a Dateline interview. Prince Andrew has repeatedly denied her claims, but now that she is taking to the airwaves the accusations will undoubtedly cause a major stir. The attorney of Ghislaine Maxwell, the woman who allegedly procured young women for Jeffrey Epstein to sexually violate, has said that recently unsealed court documents could implicate “hundreds of other people.” Due to disagreements between parties involved in the lawsuit, however, it could take some time before the documents are unsealed. One of the parties is Virginia Giuffre, claimed that Jeffrey Epstein, Ghislaine Maxwell, and a number of powerful men were all involved in a sex trafficking ring that ensnared her. The men include former New Mexico Gov. Bill Richardson, Britain’s Prince Andrew, Glenn Dublin, former Senator George Mitchell, fomer MIT scientist Marvin Minsky, modeling agent Jean-Luc Brunel, as well as other international political leaders. More news.14
Share