The protests are working––police reform is happening 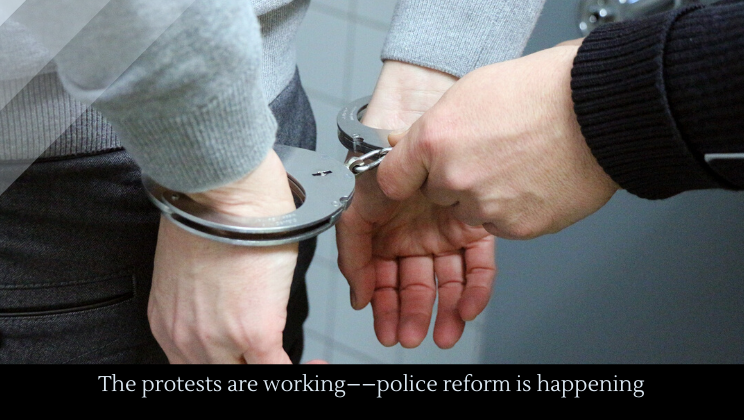 Despite the increased publicity of instances of police brutality brought about by the protests, the protests are working. The Chattanooga police now requires officers to intervene in instances of police brutality. A police officer who knocked a woman down (for no real reason) in Brooklyn has been charged with assault. Another police officer, this one in Philadelphia, has been suspended and charged with assault.

Here’s a short list of instances of police violence: The LAPD is being sued for shooting a homeless, wheelchair-bound man in the face with rubber bullets (warning: the image is quite shocking). Denver Police, meanwhile, are coming under fire for shooting pepper balls (whatever that is) at a car (driven by a black man), despite his yelled warnings that his wife, inside the car, was pregnant. The list goes on and on––and activists are keeping track. Seriously, there’s a spreadsheet with over 500 examples (as of this writing) of instances of police brutality (some of which are international).

Protests over the killing of George Floyd have spread to about 40 U.S. cities and even cities around the world. By and large, the protestors are demanding one thing: a deescalation of police brutality by demilitarizing the police. And how does Trump respond? By threatening to call the military in if state governors don’t get things under control. Trump called the governors weak in a call, goading them on to further violence. The police seem to be listening.