Reminiscent of Nixon, Trump sweat through his Fox News interview 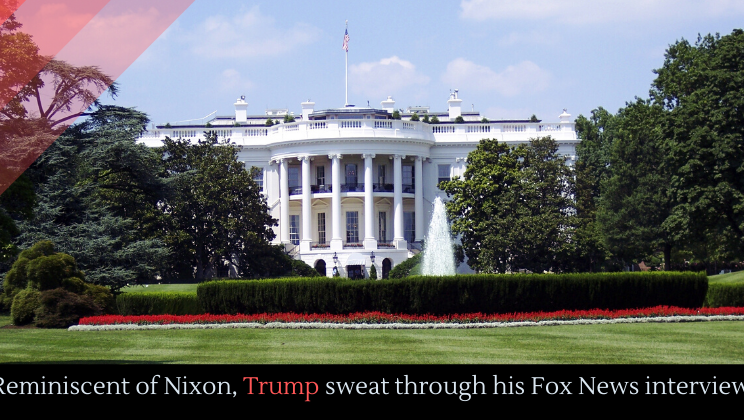 You’d think Trump’s campaign team would have learned a lesson from the time the sweaty Richard Nixon lost the first televised presidential debate to JFK. But, here we are, Trump sweat his way through his recent Fox News interview. It’s appropriate, given the pressure his campaign is under and his plummeting poll numbers.

In what is shaping up to be a repeat of his 2016 campaign, Donald Trump has demoted his campaign manager Brad Parscale. This news is the latest sign that the Trump campaign is, in the words of a recent Hill piece, flailing. That’s because things have been going horribly for him. New polls show that Donald Trump’s approval rating is plummeting. Some 67% of Americans disapprove of Trump’s COVID response. Interestingly, Trump’s support among Republicans is dropping––78% of Republicans approve of his COVID handling, down from 90% a month ago. Trump’s base, white Americans without a college degree, are split: 50% disapprove and 49% approve. Americans are also deeply skeptical of Trump’s handling of race relations: 78% of Republicans approve, but a whopping 91% of Democrats disapprove. Among Independents, 74% disapprove. Finally, 59% of Americans think the push to open the economy is moving to0 quickly.