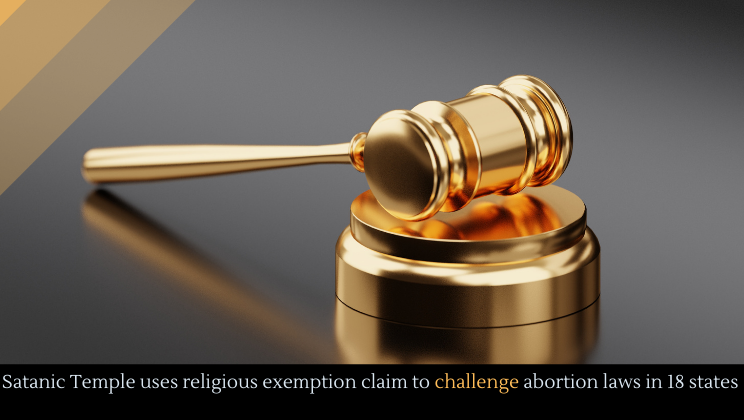 The Satanic Temple has urged its constituents in 18 states to challenge anti-abortion laws by claiming such laws violate their religious beliefs as satanists. The Supreme Court upheld a controversial Indiana law that required the burial or cremation of miscarried or aborted fetuses. The bill was signed into law by the governor at the time, Mike Pence. The Satanic Temple will challenge that law. The church issued a statement explaining their decision: “Although the Supreme Court affirmed the right of states to have an interest in the disposal of fetal remains, their ruling allows for objections to the Indiana Law based on undue burden. This law clearly places an undue burden on the religious practices of The Satanic Temple by interfering with burial rites. These traditions have existed since the birth of organized religion. Rejecting our claim would profoundly undermine a basic cornerstone of religious organizations. It would be profoundly hypocritical for any Church that advocates for religious rights not to support our claim. To be clear, members of The Satanic Temple will not be made to pay for these punitive, superfluous, and insulting burials. We claim exemption on religious liberty grounds, and we will almost certainly prevail in the courts if we are forced to fight. It’s time that petty sanctimonious panderers like Vice President Pence, who signed this law as governor, come to realize that religious liberty means freedom from unreasonable government imposition upon religious opinion and practice — not his own ‘freedom’ to impose a particular religiously-dictated practice upon the electorate whom he serves,” Satanic Temple is now an official religion in the IRS, since it has been deemed a tax-exempt organization, meaning in the eyes of the government the Satanic Temple is an official religion. The group was founded in 2012. It was conceptualized as a result of President George W. Bush’s initiative to fund all religious groups. Its founders, Malcolm Jarry and Lucien Greaves, wanted to create a group that would meet all the criteria for funding and simultaneously repulse Bush and his supporters. The group is aptly headquartered in Salem, Massachusetts, the site of the infamous 1692-3 witchcraft trials that left twenty people (and a poor dog) dead. The Satanic Temple does not believe in the supernatural Satan, but instead they believe in the literary Satan. The use this allegorical Satan as a metonymy for several values: skeptical freethought, inalienable personal rights, and curiosity. The group made a name for themselves when they protested a monument of the Ten Commandments at the Oklahoma state capitol. They didn’t march or sign petitions. Instead, they built a one-ton statue of Baphomet, a “deity” likely invented to persecute the powerful Knights Templar in the 14th century. More about religion.
Share