Satire sites are coming after Zuckerberg for Facebook’s noninterference policy 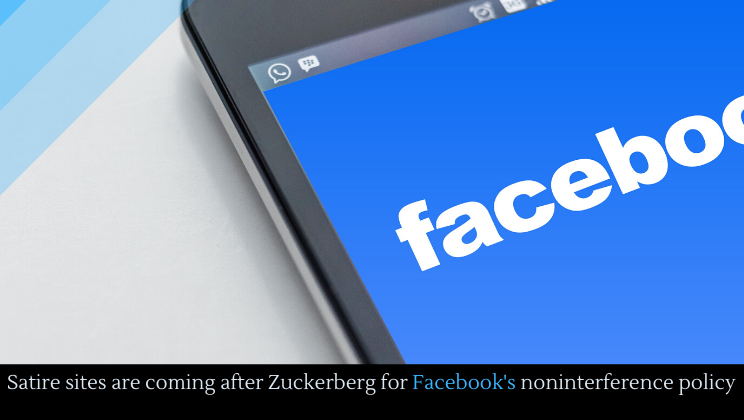 Satirical websites are going after Mark Zuckerberg hard by calling him a child molester and saying he’s dead. They’re not doing so just to be jerks. Instead, they’re trying to test Facebook’s refusal to factcheck its content. This story is especially significant given two things: Trump’s ongoing battle with Twitter and accusations of political corruption previously levied against Zuckerberg.

One thing you need to know about the latest Facebook drama is Trump’s Twitter war, which was partly what Zuckerberg was reacting to. A little less than a week ago, Trump took to twitter to complain about twitter, tweeting out a message heard ’round the world:

Then he signed an executive order targeting social media, which, according to the New York Times, might actually backfire on him. Twitter CEO Jack Dorsey warned that the company would continue to fact check any information related to elections.

And then, following the violence in Minnesota, Trump tweeted this:

Twitter escalated by hiding the post under this warning, signaling a major escalation in the battle with Trump:

Mark Zuckerberg had a secret dinner at the White House. Your first reaction to that might rightly be: so what? Let the guy have dinner. Except here’s the problem. Facebook is under scrutiny for potentially violating antitrust legislation, and Elizabeth Warren thinks that Zuckerberg is “going on a charm offensive.” Facebook spokespeople said that such a dinner is normal, however.

Facebook’s attempt to weed out the toxic, fake news articles is highly questionable, and not just because it’s run by someone with open bias. The head of its news partnerships, Campbell Brown, cofounded a website that publishes anti-Warren ads. Facebook also faced backlash after it included the infamous news site Breitbart on its new “high quality” news tab. That news outlet has been widely criticized for posting extremist, “alt-right” content and conspiracy theories.