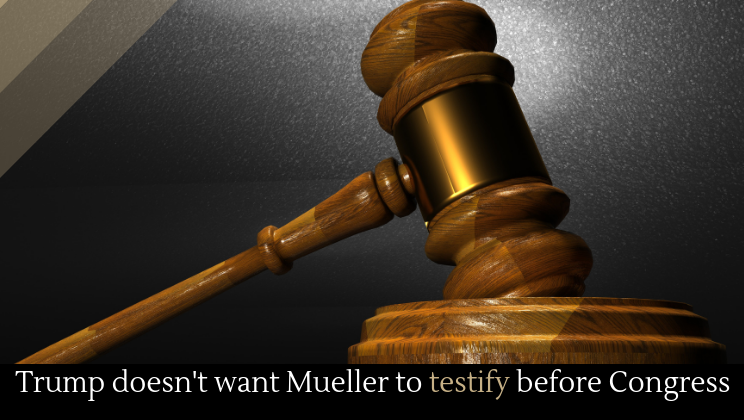 On Sunday, Donald Trump said that he objects to Mueller’s testifying before Congress, even though William Barr, the Attorney General, has said he would have “no objection” to Mueller testifying.

Trump said on Twitter: “After spending more than $35,000,000 over a two year period, interviewing 500 people, using 18 Trump Hating Angry Democrats & 49 FBI Agents – all culminating in a more than 400 page Report showing NO COLLUSION – why would the Democrats in Congress now need Robert Mueller… to testify. Are they looking for a redo because they hated seeing the strong NO COLLUSION conclusion? There was no crime, except on the other side (incredibly not covered in the Report), and NO OBSTRUCTION. Bob Mueller should not testify. No redos for the Dems!”

This tweet is either genius or moronic, and it’s not as easy to tell which as you might imagine. He knows that the Democrats are pushing to get Mueller to testify, and this tweet might seem as though he’s simply trying to block it. But there may be another strategy at work here. Trump––and the GOP––may be trying to push the Democrats into attempting to impeach Trump. Both the GOP and the more moderate Dems know that the progressive side of the Democratic party is the tail wagging the dog, and they’re clamoring for Trump’s impeachment. The rest of the party does not want to impeach Trump because they know it won’t stick, and the public doesn’t have the appetite for impeachment yet. Impeachment is, in short, political suicide.

That would explain why Trump seems to be agitating towards impeachment. At the end of April, Trump announced that his administration would stonewall all subpoenas from Congress. If Trump and his administration does not comply with questions, then the Democrats in the House will not be able to do their due diligence, which may push them farther towards impeachment. It appears as though Trump may actually believe impeachment is inevitable.