Trump mocked for “hereby” ordering businesses not to buy from China 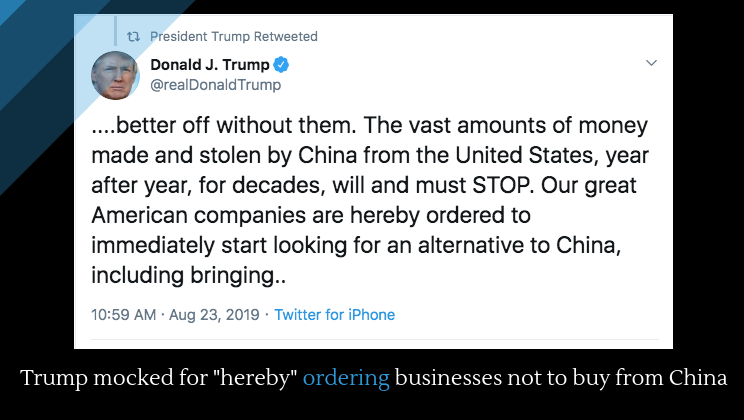 President Trump has tweeted a lot of dumb things. People have mocked him for those tweets, but rarely has one of his tweets caused as much fallout as this one:

The president, of course, cannot “hereby order” businesses to do anything. Well, to be more specific, he can “hereby order” whatever he wants, but he has zero constitutional power to enforce something like this. His critics began mocking him almost immediately.

The issue, as I see it, is not that Trump said something dumb on twitter. We’re long, long past that. It’s too late to complain about his twitter use, since we’ve allowed it for three painful years. The real issue is that he, as a president, commands no respect. He has weakened the office of the president by constantly inviting mockery via twitter. Say what you want about Obama or Bush, but the two at least commanded some respect in the office and didn’t shoot their mouths off on twitter.

Earlier this very week President Trump used twitter to make a damn fool of himself by proposing to buy Greenland from Denmark. He of course did not use proper diplomatic channels, first because he only uses twitter for pretty much anything and second because you can’t buy a country. Naturally, his “proposal” was not well received, and according to him the Danish Prime Minister got a bit “nasty” in her refusal. As a result, Trump has postponed a state visit to Denmark, embarrassing pretty much everyone.