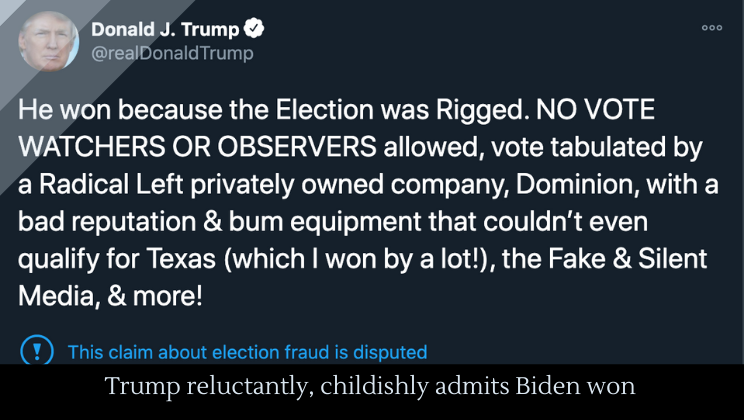 The horrible saga that was the 2020 election may be almost over. Trump is beginning to openly admit that Biden won the election, in his own, petty way. Note how his tweet begins, “He won:”

He won because the Election was Rigged. NO VOTE WATCHERS OR OBSERVERS allowed, vote tabulated by a Radical Left privately owned company, Dominion, with a bad reputation & bum equipment that couldn’t even qualify for Texas (which I won by a lot!), the Fake & Silent Media, & more! https://t.co/Exb3C1mAPg

The Trump campaign has dropped its ridiculous lawsuit demanding a ballot recount in Arizona, after they realized that the margin of victory could not be overcome. This aligns with one White House aide’s claim that Donald Trump is “very aware” that he lost the election, but he is putting up a fight as a “performance” for his supporters. Maybe this is a signal that we’re in the final act of that performance.