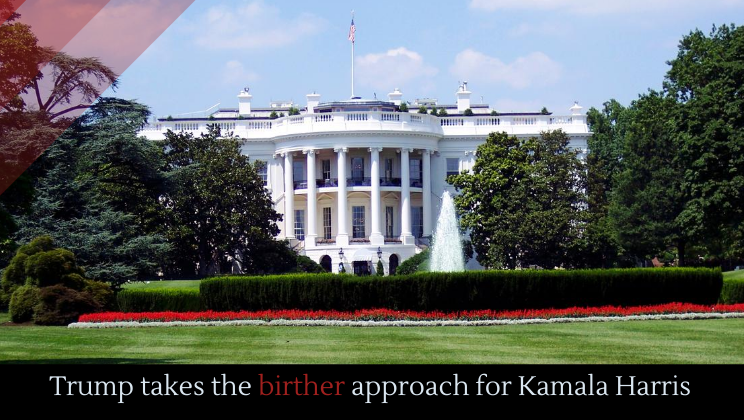 Trump is trailing in the polls, so he’s going back to what worked for him in the first place: attacking his rival’s citizenship. This time, he’s got help. A lawyer called John Eastman published an op-ed in Newsweek calling Kamala Harris’s citizenship into question. Trump responded to the op-ed and used his typical noncommittal language to strongly hint that he agreed: “I heard it today that she doesn’t meet the requirements,” he said. “And, by the way, the lawyer that wrote that piece is a very highly qualified, very talented lawyer. I have no idea if that’s right. I would’ve — I would have assumed the Democrats would have checked that out before she gets chosen to run for Vice President.”

Fortunately, it doesn’t seem like this particular noodle is sticking to the wall. Lindsey Graham, obstinate Trump supporter, actually broke with Trump here and rejected the claim that Harris is not eligible to be VP. Trump will just keep throwing spaghetti at the wall, though.  Kayne West’s allegedly Independent presidential run is be a strategy to siphon off black voters from the Democratic party and help Donald Trump. That may sound crazy at first, but consider the fact that key Republican operatives are pushing Kanye to run and helping manage his campaign. At least 6 such operatives have been identified so far.