Warren’s poll lead is growing, and Trump is panicking 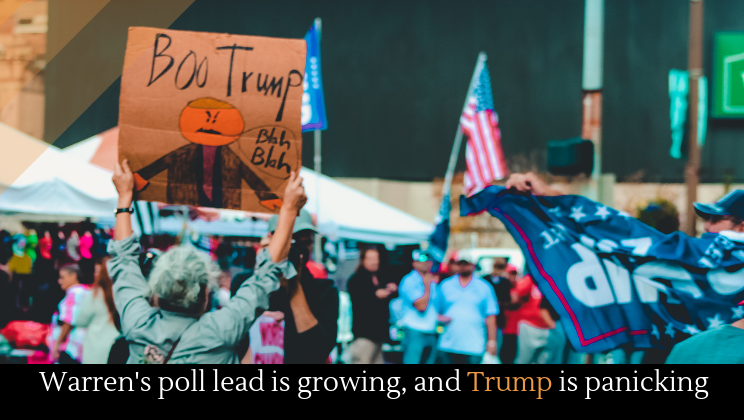 According to several polls, Trump is facing serious a serious challenge––the top five Democrats are all beating Trump in a projected 2020 election. Bernie Sanders, for example, is 12 points up on Trump in that poll, and Warren is 11 points over Trump. This represents a big gain for Warren––an additional four points since July. Compared to other Democratic candidates for presidential nomination, Warren is the woman to beat since she is seen more favorably than any other Democratic candidate.

Trump, meanwhile, is lashing out. He tweeted, “In a hypothetical poll, done by one of the worst pollsters of them all, the Amazon Washington Post/ABC, which predicted I would lose to Crooked Hillary by 15 points (how did that work out?), Sleepy Joe, Pocahontas and virtually all others would beat me in the General Election.”

He further complained, “This is a phony suppression poll, meant to build up their Democrat partners, I haven’t even started campaigning yet, and am constantly fighting Fake News like Russia, Russia, Russia. Look at North Carolina last night. Dan Bishop, down big in the Polls, WINS. Easier than 2016!”

Trump may be lashing out like a lunatic, or a baby, or a baby lunatic, but he may also be right. Or at least he’s on to something––this poll is hypothetical, and polls leading up to his election suggested he would win. How did that work out?