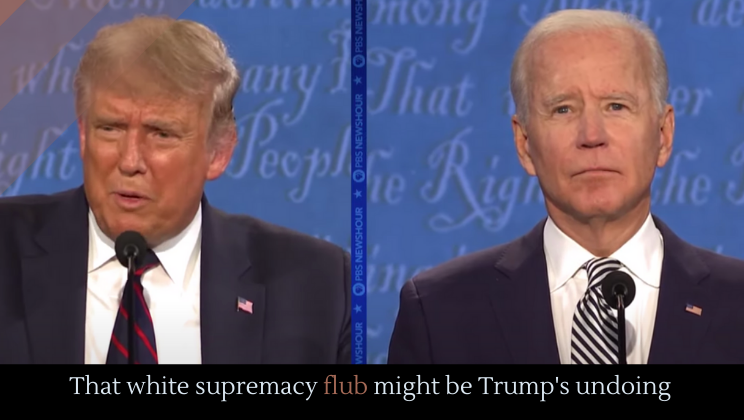 Viewers of the 2020 debate might have witnessed an historic moment: Trump’s undoing. He really stepped in it when he told the Proud Boys, a “western chauvinist” group who denies connection to the alt-right though accused of white supremacy,  “to stand back and stand by. Why shouldn’t he have? In 2017, he said there were “very good people” on both sides of the white-supremacist violence in Charlottesville, and that had basically no repercussions for him.

This time seems to be different––the Proud Boys were stoked to have Trump call them out and act like he was giving them orders. Now, the Republican Party is freaking out because they don’t want to be associated with such a group as the Proud Boys, and Trump is trying to backpedal.

Even Fox News, full of Trump sycophants, is stunned at how badly Trumped whiffed the question about white supremacy––a gaff that made his shoutout to the Proud Boys look all the worse. One Fox News anchor said Trump “ruined the biggest layup” in the “history of debates.”

It seems that Trump is speaking to what he thinks his base wants, but did he go too far this time?