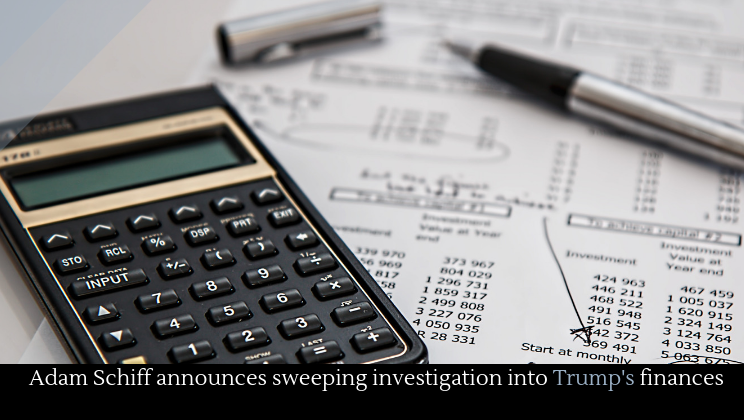 In Trump’s State of the Union, which he hoped would be a clarion call for unity between Democrats and Republicans, he warned Democrats from undertaking any “ridiculous, partisan investigations.” He was immediately blasted on social media, especially Reddit, which pointed out the similarities between Nixon, who called for an end to the Watergate investigation and Trump, who just did the same. Redditors also pointed out that only tyrants and despots say, “Stop investigating me!”

Whatever Trump hoped to accomplish with this warning (which we’ll talk about below), it had one detrimental effect: it likely inspired House Intelligence Committee Chairman Adam Schiff to spearhead a sweeping investigation into whether Donald Trump is using his presidency for his own financial gain.

According to Schiff, the investigation will “allow us to investigate any credible allegation that financial interests or other interests are driving decision-making of the President or anyone in the administration…That pertains to any credible allegations of leverage by the Russians or the Saudis or anyone else.” The investigation would further attempt to determine if Trump “sought to influence US government policy in service of foreign interests.”

Schiff’s announcement confirms the suspicion, shared by many, that the Democratic victories in the midterm elections would lead to investigations into the Trump administration.

There have long been speculations that this was Trump’s goal. There are a number of ways he could be doing so. Business at his hotels has nearly doubled since he was elected president. He holds campaign events at his own properties, which of course brings him money since he’s renting his own space. After he was elected, his golf club in Florida doubled its membership fees. And speaking of golf––he spends taxpayer money to go golfing at his own clubs. He’s paying himself to take time off, and he’s paying himself with taxpayer money. The list goes on and on and on.

Trump has not reacted well to the investigation. He has called Schiff a “political hack,” and usually when Trump gets angry about something it means that whoever is bothering him is on the right track. Schiff responded on Twitter: “I can understand why the idea of meaningful oversight terrifies the President. Several of his close associates are going to jail, others await trial, and criminal investigations continue. We’re going to do our job and won’t be distracted or intimidated by threats or attacks.”

The committee has also voted to submit copies of all the interviews the committee conducted during its Republican-led probe to the Mueller investigation, including Jared Kushner and Donald Trump Jr.

It seems, then, that Trump’s State of the Union threat might have backfired severely. So why did he make it? One possibility is that Trump was speaking to his base. He has long used the accusation of being the butt of a political witch hunt to rally his base to his cause. Perhaps he is hoping that, by calling for an end to the investigation, he can begin claiming he’s being unfairly persecuted by the Democrats and, thereby, discredit them.