Game theory may help explain the shutdown (and how it ends) 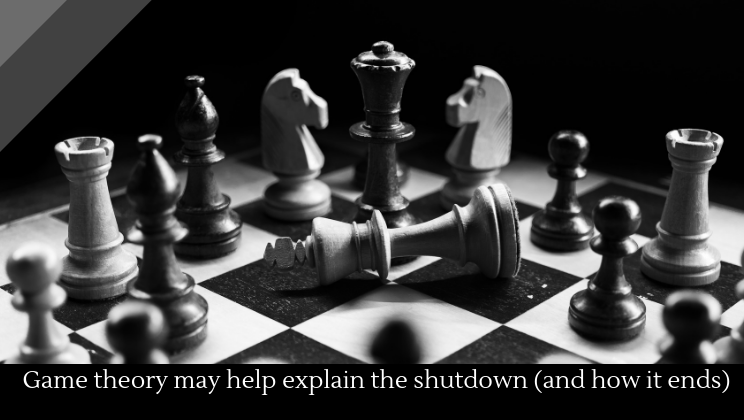 The epic American shutdown, now the longest in United States history by far, seems to show no signs of slowing. A few days ago, Nancy Pelosi threatened to take away the one thing Trump loves above all else: the spotlight. By advising the president to postpone the State of the Union, she demonstrated political toughness for her base. Trump shot back, and in a sarcastic letter told her:

I am sorry to inform you that your trip to Brussels, Egypt and Afghanistan has been postponed…We will reschedule this seven-day excursion when the shutdown is over…It would be better if you were in Washington, negotiating with me and joining the Strong Border Security movement to end the shutdown.

The Trump administration also asked State Department employees to come back to work, promising to try to free up funding. Together, this all signals a long shutdown.

That’s exactly what game theorists predict. The shutdown is like a game of chicken:

The players — Trump and Pelosi/Schumer — have essentially strapped themselves into two cars pointed at each other and hit the gas.

The question is who swerves at the last minute and loses face and status,” said Colin Camerer, a behavioral game theorist at CalTech. For modelers like Colin, the person who swerves is known as a cowardly dove, while the car that plows forward is a bold hawk.

In this scenario, though, there are more than just two players––there is also the voting public. Neither of the two players involved in the game of chicken want to be the dove, both want to be the hawk––at least in their supporters’ eyes.

Another game theorist notes that the emergency declaration was the best option:

Trump ends the shutdown with an emergency declaration. Even if congressional Democrats sue and win, Trump could shift blame to the courts and still show his base that he’s tough on border security issues.

That he didn’t suggests the shutdown might go on for a long time.